IF YOU’VE ever had one too many drinks at the pub and regretted it, a new machine built by scientists in Canada could help.

The mask helps boozers sober up three times faster than they would naturally, according to research published Thursday, promising to erase the blunder of having overdone it on a work night.

“Most people have had that feeling of drinking too much and wishing they had not had the last few drinks and were more sober,” study lead author Dr Joseph Fisher told the Daily Mail.

“Obviously we would not recommend drinking too much, but as a rule of thumb this machine halves the amount of alcohol in someone’s system within 45 minutes, instead of the two to three hours it usually takes on average.”

The bright blue booze buster consists of a briefcase-sized tank of carbon dioxide which is connected to the mask by a long tube.

Wearers breath hard and fast into it, expelling alcohol from their blood in the process.

Wearers of the bright blue device hyperventilate into it, expelling alcohol from their blood in the process[/caption]

Huffing and puffing after a few pints would normally make you feel dizzy or faint, but the device helps prevent this.

That’s because it provides the wearer with carbon dioxide, which they would otherwise lose too quickly when hyperventilating, causing light-headedness.

However, the boffins behind it say it could also be used to pull sozzled drinkers out of a booze-fuelled haze.

Five people given half a glass of vodka tested the invention as part of a small initial study published in the journal Scientific Reports.

Volunteers cleared alcohol from their blood three times faster when using the machine than when they did not use it.

“It’s almost inexplicable why we didn’t try this decades ago,” he told The Times.

Asked if pub-goers could also benefit, he responded: “Absolutely. It doesn’t make me look good. But the answer is ‘yes’.

“If you’re sitting in the bar and you’ve got a little pocket breathalyser and you’re over the limit, could you use this device to get under the limit? Yes, sure, of course.”


Huge asteroid ‘following’ Mars could be our Moon’s ‘stolen twin’


What happens if you fall into a black hole? Agonising death revealed

In other news, alcohol tolerance might have saved our ancestors from extinction, according to scientists.

And, here are the five most addictive substances on Earth according to scientists.

What do you think of the booze mask? Let us know in the comments! 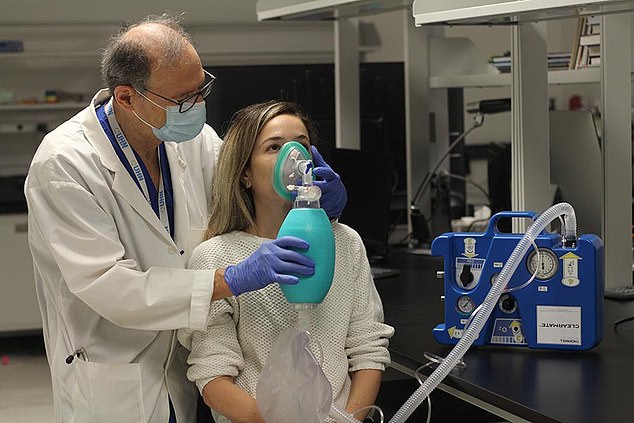 Call of Duty Cold War is out TODAY...