GOOGLE Chrome has loads of hidden Easter Eggs – including a very addictive game.

Better yet, you can access this secret title even when you’ve got no internet.

In fact, that’s by design.

Dino Runner is designed to give phone and laptop users something to do when the WiFi is down.

First, you need to lose access to both WiFi and mobile internet. Turn off your internet on a computer, or switch to Airplane Mode on a phone.

Then load up Google Chrome and try to launch a website – which should fail.

You’ll then see a “No internet” page with a dinosaur at the top.

On a computer, simply press the space bar and the game will active.

Then slam the space bar to jump over obstacles to earn a higher score.

The highest possible score is 99,999 – but it’s a hard target to hit unless you’re a dedicated gamer.

The little-known game was actually first added in September 2014.

But it’s not obvious that the game exists, making it relatively secret.

Google Chrome’s Sebastien Gabriel recently revealed that the dinosaur was inspired by going back to the “perhistoric ages” – befoire WiFi.

Early designs for the dinosaur character were codenamed Project Bolan.

That was a reference to the late Marc Bolan, who sang for the English glam-rock band T-Rex in the ’70s.

And most of the players come from countries with unreliable internet, like India, Brazil, Indonesia and Mexico.

If you don’t want to turn the internet off, there is still a way to get the game.

Simply type chrome://dino in to your web browser (just like entering a web page) and you’ll be taken to the game. 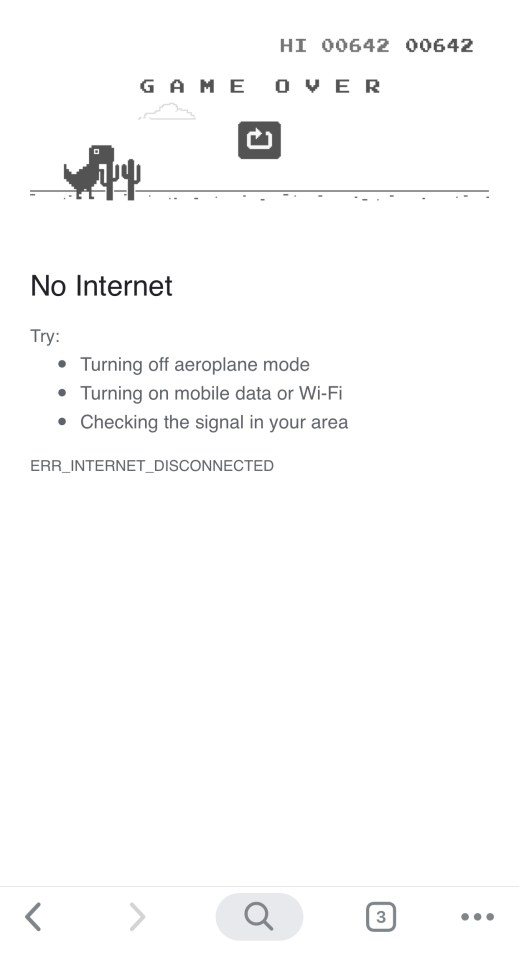 ‘Sorry we make you uncomfortable’:...

Where to buy Nintendo Switch O...

Urgent warning to fix your iPh...