GIANT sea scorpions much larger than humans once roamed and hunted in ancient oceans.

The creepy creatures have been documented in a new study that’s attempting to fill in the patchy scientific record of Australian sea scorpions. 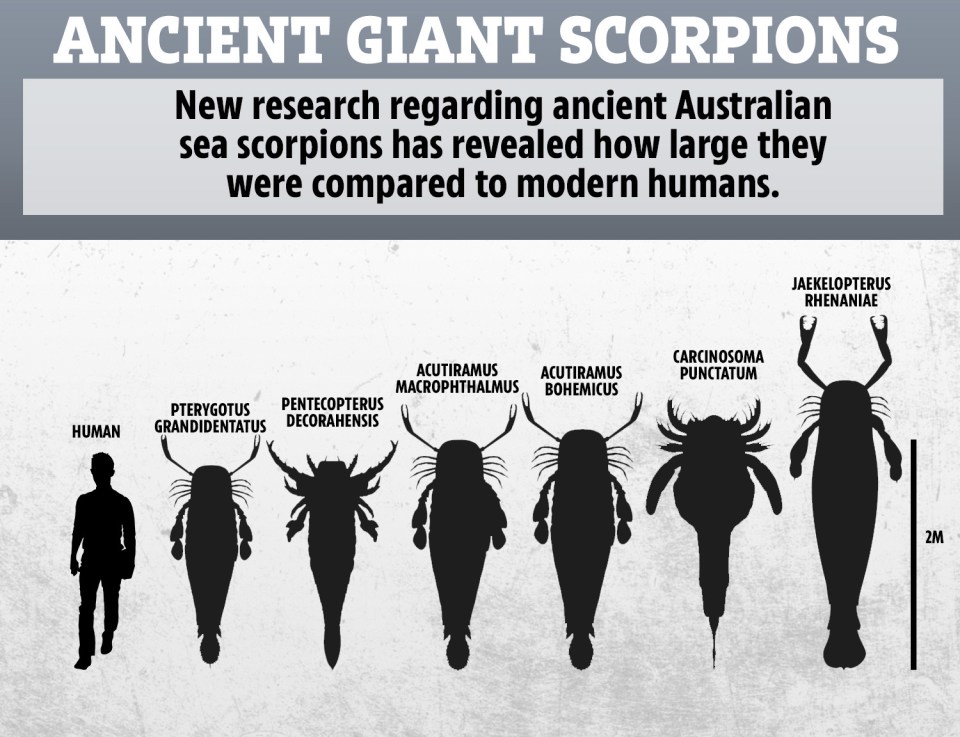 The large creatures date back to a period called the Paleozoic Era.

This was around 541 million and 252 million years ago, before dinosaurs had taken over the planet.

It was a time when arthropods, such as insects, crustaceans and scorpions, could reach extreme sizes.

Paleozoic arthropods were some of the largest animals on Earth at the time and would have been found in many oceans all over the world.

We know about the creatures because of fossil evidence[/caption]

We know the sea scorpions looked like the scorpions we have today due to fossilised remains.

However, they are more like cousins to the modern scorpions we know.

They’re some of the largest marine predators ever observed in the fossil record.

This included the species Jaekelopterus rhenaniae, which was up to eight foot long.

Experts compare them to modern day great white sharks in terms of how high up the food chain they would have been.

Fossilied remains suggest they could have caught prey in their huge claws and crushed in with the teeth-like structures on their legs.

They were also thought to be quick swimmers.

Scientists think they ate fish and smaller arthropods but haven’t ruled out the giant scorpions would have feasted on a human if one had been around at the time.

Australia’s ancient sea scorpions were first documented on record in 1899 but there’s still a lot we don’t know about them.

It provides evidence of six different groups of the creatures that could have existed in Australia.

This study has been published in Gondwana Research.

In other news, locusts are plaguing East Africa as the country continues to battle the global pandemic.

Insects trapped in amber for 99million years have revealed stunning details about creatures from that time period.

And, fossilised footprints found in South Korea have been attributed to an ancient 13 foot crocodile that walked on two legs.

What do you think of this scorpion discovery? Let us know in the comments…

Your iPhone can now tell you if yo...

‘Lucky not to get a red’: Ronaldo accused of lashing out in ‘total frustration’ during Man Utd hammering by Liverpool