ROBOT dolphins that offer a cruelty-free way to interact with the super-smart mammals could be making their way to aquariums in China.

The animatronic machines look just like real dolphins and can swim in tanks and even respond to questions with a nod of the head.

Animatronic dolphins (pictured) may one day replace their live counterparts at zoos, aquariums and marine parks[/caption]

Built by San Francisco-based Edge Innovations, the machines could one day replace live animals in aquariums in the wake of bans on the wildlife trade.

Marine parks across the globe face rising pressure to abandon exhibits of whales and dolphins. Activists say keeping the animals in captivity is cruel.

“The marine park industry has had falling revenues for over a decade due to ethical concerns and the cost of live animals,” Roger Holzberg, who designs robot dolphins in California, told The Guardian on Monday.

“Yet the public hunger to learn about and experience these animals is still as strong as ever.

“We believe that it’s time to reimagine this industry and that this approach can be more humane, and more profitable at the same time.”

Edge’s robot Flippers cost $20million (£16million) a pop can apparently last for ten years in salty water without any maintenance.

They’re modelled after the bottlenose dolphin and are remotely operated by a person who can trigger actions such as nodding at aquarium visitors.

Edge says the contraptions can swim for up to 10 hours on a single charge of their batteries.

They weigh 270-kilos, about the same as the real thing, and have been designed by Hollywood animatronics experts to swim like them, too.

“Inside that robot is a skeleton where the major elements look very much like a real dolphin,” Holzberg, a former creative director for Disney, said.

“The detail goes so far as to actually integrate fat bladders to be sure that the buoyancy and the feel of it when you actually touch it or move with it or bump against, it feels like its real life counterpart.”

Robot animals may become a staple of zoos of the future as activists push for their removal from captivity.

The robot bottlenose dolphins are indistinguishable from the real thing[/caption]

Whales and dolphins, for example, are social, intelligent creatures who can travel up to 62 kilometers a day in the open ocean.

In captivity dolphins typically live for around 20 years. In the wild they live for between 30 and 50 years.

Marine parks argue that showing the animals to the public up close promoted education about endangered or vulnerable species.

Edge says it is currently in talks with a handful of Chinese marine parks over the use of its technology.

The company reckons it can sell upwards of 150 of them over the next three years.

That may sound a lot given their sky-high cost, but given the price of feeding and keeping a live animal healthy, parks may be tempted.

“In terms of a 10-year business operating period and a two million annual visitor capacity, the overall investment and maintenance costs for a decent animatronics entertainment portfolio only accounts for about one quarter or no more than one-third of what a traditional aquarium spends,” Edge Innovation’s Li Wang told the South China Morning Post.

In other news, a Dad is thought to be the first Brit whose life has been “saved” by his smart watch.

The Facebook of the future could connect to your brain as firm buys ‘mind-reading machines’ start-up CTRL-labs.

And, this Google AI baby monitor can warn parents before their child wakes and if it is silently struggling.

What are your thoughts on robot dolphins? Let us know in the comments… 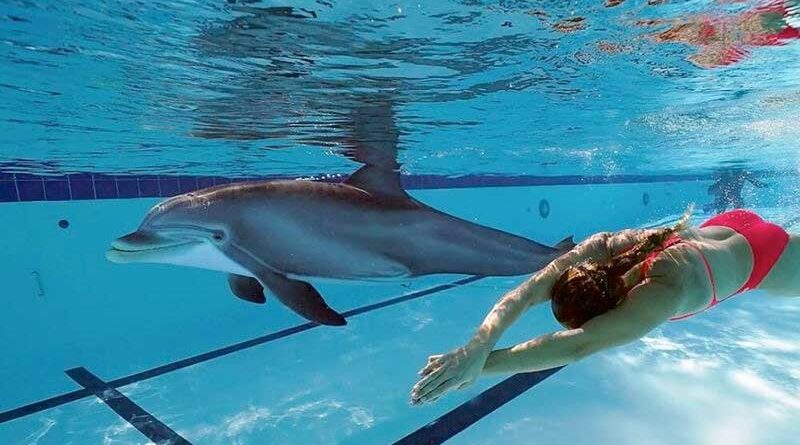