IT MAY sound a bit fishy, but some of humanity’s oldest ancestors looked a lot more like trout than chimpanzees.

That’s because we’re all descended from fish that swam in Earth’s vast ancient oceans hundreds of millions of years ago. 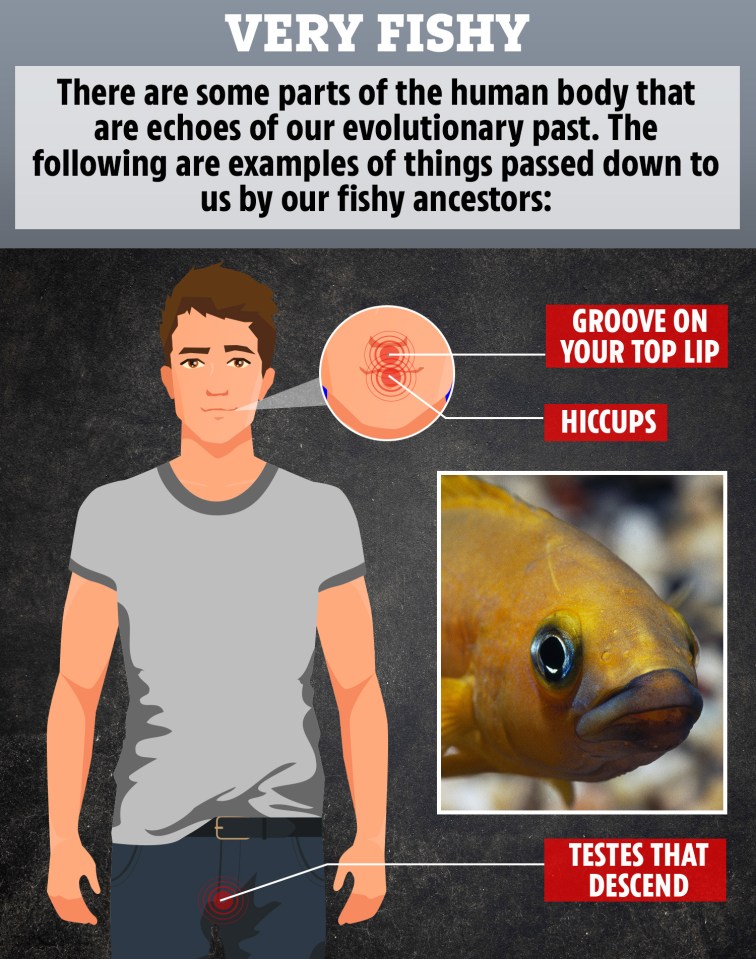 Despite many millennia having passed since then, the human body still features biological echoes of our water-dwelling past.

From hiccups to the shallow “dent” above our lips, these remnants were discussed by scientist Dr Michael Mosley in a piece for BBC News.

Hiccups are irritating at best and downright rage-inducing at worst, but they’ve been a part of human biology for as long as we’ve existed.

It’s thought the involuntary gulps are a leftover from our fishy ancestors, who needed them (or something similar) to breath.

Human hiccups are caused by the spasming of a large muscle in the chest called the diaphragm.

Those spasms cause a sudden gulp of air and force your vocal cords to close very briefly, which creates the characteristic sound.

Scientists think the hiccup is the result of the way our breathing evolved following our split with our fishy ancestors.

In fish, breathing is controlled by an ancient part of the brain called the brain stem.

The nerves that activate breathing take a short and simple trip from the brain stem to the throat and gills.

In humans, the brain stem has to send signals to the throat, chest and diaphragm – a much more complicated journey.

The complex arrangement means the nerves are prone to spasm, causing hiccups.

Our breathing system may be distinct from that in a fish, but it’s our departure from the simplicity of our ancestors that has led to our spasming diaphragms.

At the top of almost everyone’s lip is a slight dent that runs up to the bridge of the nose.

You probably barely notice it when you gaze in the mirror – and it serves no real purpose – but this common feature is thought to have been passed to us from our fish-like ancestors.

Known as the philtrum, the lip dip is formed as our face becomes… a face, when we’re in the womb.

Our face is formed of three parts that come together in the first 10 weeks in the womb, a process we inherited from our fishy ancestors.

When you’re about the size of a grain of rice, your eyes are on the top of your head and later move into the middle, while your top lip alongside your jaw and palette begin as gill-like structures on your neck.

Over time, they seamlessly move to the positions that we normally associate with the human face.

The three parts of our face have to meet somewhere, and the philtrum is what that meeting leaves behind.

Some people – about one in 700 – are born with cleft lips when the meeting of these parts is out of sync.

In sharks, the testes are found in the chest, and humans seem to have inherited this from their fishy ancestors (well, sort of).

Like the shark, our gonads start life higher up – near the liver – and then descend over time to our crotches.

To get all the way down to the scrotum, men’s testes have to continue descending well after birth.

This lengthy journey results in the weakening of the abdominal wall, making men more susceptible to inguinal hernias.

These hernias are actually your gut sticking out through your weakened muscle barrier, creating a lump near your crotch.

“Inguinal hernias often require surgery, and if you are unfortunate enough to get one, blame it on fish,” Dr Mosley said.

Here’s a brief history of life on our planet

In other news, humans are descended from chinless fish-like creatures that gobbled MUD to survive, according to expets.

The face of the oldest direct human ancestor, which lived 3.8million years ago, was recently revealed by scientists.

And, newly discovered ancient teeth dating back 31,000 years are evidence of a new ethnic group in human history.

What do you think of humanity’s fishy past? Let us know in the comments!

'You'll be OBSESSED with...