LIFE on Earth was almost wiped out when a distant star exploded nearly 360millions years ago, according to a new study.

The supernova 65 light years away is thought to have caused a mass extinction event that killing off 87 per cent of the world’s species.

US researchers behind the study said their findings proved that faraway events in our galaxy can have devastating impacts on Earth.

Lead author Professor Brian Fields, of Illinois University, said: “The overarching message is life on Earth does not exist in isolation.

“We are citizens of a larger cosmos, and the cosmos intervenes in our lives – often imperceptibly, but sometimes ferociously.”

Supernovae occur at the end of a star’s life and are so powerful they emit as much energy as the sun releases in a million years.

The stellar blasts ignite in the Milky Way about twice a century – and are more dangerous than previously believed, according to the study.

It was thought one would have to occur within 50 light years for the devastating radiation to reach the planet.

However, the new research hints that such the deadly particles can reach as far as 65 light years following an explosion.

The event in question occurred during Earth’s Devonian period, also known as the “age of fish”, nearly 100million years before the first dinosaurs.

There were no large land creatures, but the oceans were awash with massive fish and other beasts.

They included the 35ft tank-like sea monster Dunkleosteus, which ate sharks for breakfast.

But the predator mysteriously died off along with at least 80 per cent of all other species towards the end of the Devonian period 359million years ago.

It was one of the worst disasters in Earth’s history and has puzzled experts for decades.

Now scientists have discovered that a nearby star ran out of fuel and detonated at the time.

The supernova is believed to have destroyed Earth’s protective ozone layer.

The finding, published in the journal Proceedings of the National Academy of Sciences, is based on hundreds of thousands of plant spores from the end of the Devonian period.

They were sunburnt by ultraviolet light – evidence of a long-lasting ozone-depletion event over hundreds of thousands of years.

Professor Fields said: “Earth-based catastrophes such as large-scale volcanism and global warming can destroy the ozone layer, too.

“But evidence for those is inconclusive for the time interval in question.

“Instead we propose one or more supernova explosions – about 65 light-years away from Earth – could have been responsible for the protracted loss of ozone.”

The analysis rules out the theory that the Denovian extinction was caused by an asteroid strike like the one that killed off the dinosaurs.

Other astrophysical reasons for ozone depletion – such as solar eruptions and gamma-ray bursts – were also investigated.

Jesse Miller, a graduate student in the lab, said: “But these events end quickly and are unlikely to cause the long-lasting ozone depletion that happened at the end of the Devonian period.

A supernova, on the other hand, delivers a one-two punch, explained the researchers.

The explosion immediately bathes Earth with damaging UV, X-rays and gamma rays. Later, the blast of debris slams into the solar system.

This subjects the planet to long-lived irradiation from cosmic rays accelerated by the supernova. The damage to Earth and its ozone layer can last for up to 100,000 years.

Fossil evidence suggests a 300,000-year decline in biodiversity leading up to the mass extinction, perhaps caused by multiple supernovae explosions.

Mr Miller said: “This is entirely possible. Massive stars usually occur in clusters with other massive stars – and other supernovae are likely to occur soon after the first explosion.”

It may all sound a little scary, but co-author Adrienne Ertel, also a graduate student, pointed out there is no cause for immediate alarm.

She added: “To put this into perspective, one of the closest supernova threats today is from the star Betelgeuse.

“It’s over 600 light-years away – well outside the kill distance.”

In other news, Nasa recently shared a stunning snap of Betelgeuse, one of the brightest and most unusual stars in the night sky.

A planet triple the size of Jupiter has been found lurking in a nearby solar system.

What do you think of the supernova theory? Let us know in the comments! 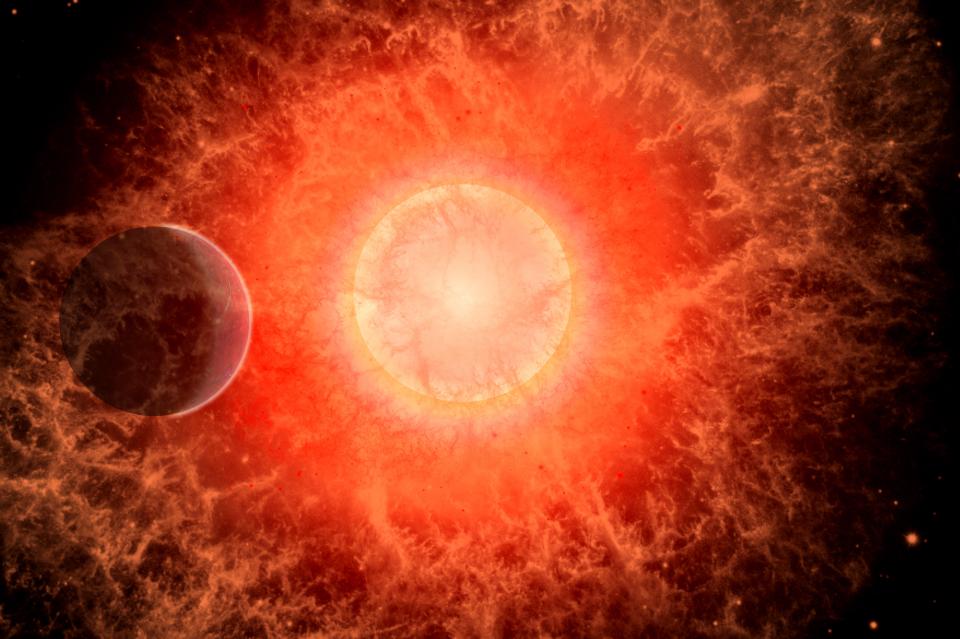