ELON Musk is set to reveal a ‘working Neuralink device’ this Friday.

The highly anticipated but controversial brain chip aims to help us compete with artificial intelligence and help those with severe brain injuries and diseases.

The 3pm PT start will be 10pm for viewers in the UK and 6pm for Eastern Time US residents.

Musk has revealed quite a few details about Neuralink already but we’re yet to see a working device so this announcement is huge. 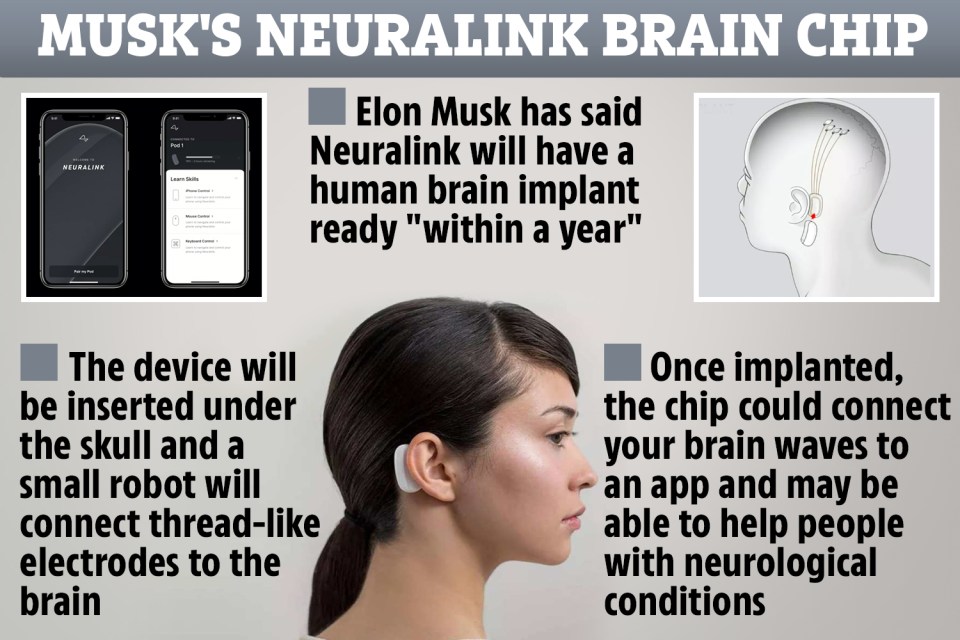 Several firms worldwide are working towards the creation of interfaces that link a computer to your brain to grant you super-intelligence.

Neuralink’s aim is to create a full brain interface within 25 years.

This would mean that humans could connect to devices with just their minds.

Musk wants his brain implants to stop humans being outpaced by artificial intelligence.

Neuralink was founded in 2016 and is working on tiny ‘threads’ that could be inserted into the human brain and help treat injuries and trauma.

Musk previously explained that the insertion process would require a process to “take out a chunk of skull”.

The patient would then be stitched up and Musk says you wouldn’t even be able to tell that they had the device inserted.

Back in February, Musk announced a new and improved version of the implant.

On its website, the company boasts that it’s developing “ultra high bandwidth brain-machine interfaces to connect humans and computers”.

The technology isn’t just intended for creating a super human cyborg race though.

Musk has said Neuralink will first focus on medical applications, such as tackling the effects of brain diseases like epilepsy.

After this, the brain chips will be updated to develop a “symbiotic relationship” between AI and humanity.

Ultimately, Musk thinks that implanted chips are what will protect humans from becoming an endangered species.

Musk told The Joe Rogan Experience podcast that the implant is around an inch in diameter, similar to the face of a smartwatch.

He said a robot would be used to insert the implant and connect thread-like electrodes to the brain.

Musk explained: “If you got an interface into the motor cortex, and then an implant that’s like a microcontroller near muscle groups you can then create a sort of a neural shunt that restores somebody who quadriplegic to full functionality, like they can walk around, be normal – maybe slightly better overtime.”

In other news, a terminally-ill scientist is on a mission to become the world’s first cyborg in a bid to combat his muscle wasting disease.

Silicon Valley geeks are turning their kids into cyborgs, according to one neuroscientist.

And, Cyborgs will rule the planet within 80 years, a Brit scientist has claimed.

What are your thoughts on Neuralink? Let us know in the comments…