SPACEX’S next Starlink launch is set to happen later today.

Another 60 of Elon Musk’s satellites will be heading into the sky and if you look up over the weekend you may be able to see a few already there. 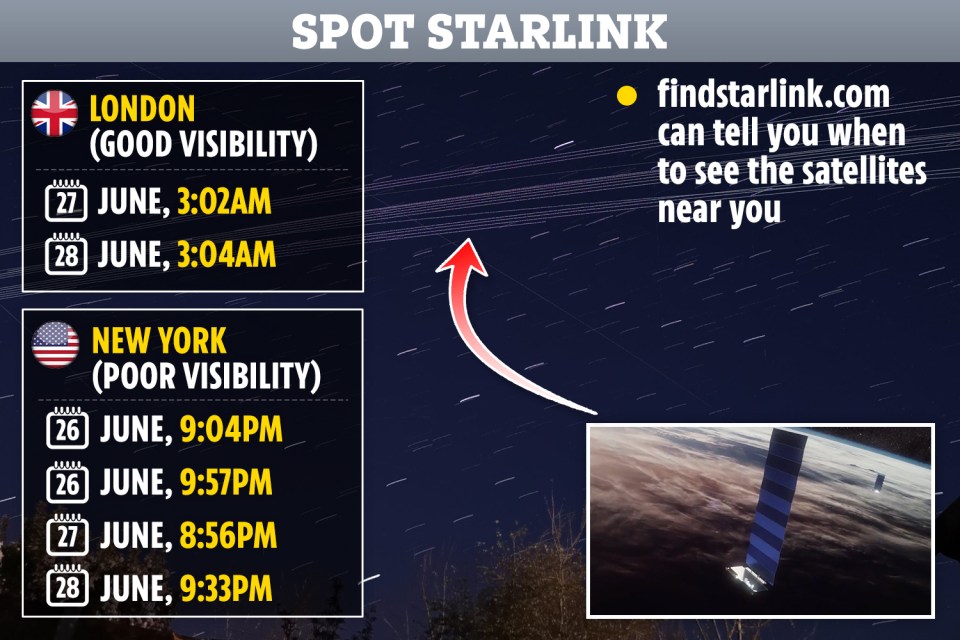 Good weather can increase the visibility of the satellites[/caption]

An update on the Nasa Kennedy Space Centre website states: “SpaceX is now targeting June 26, 2020 4:18 PM ET for the 10th launch of Starlink.

“SpaceX is scheduled to launch 60 Starlink satellites from a Falcon 9.

“This will be the 10th mission in support of the constellation of networked satellites known as Starlink.

“The goal of Starlink is to create a network that will help provide internet services to those who are not yet connected, and to provide reliable and affordable internet across the globe.”

Batches of the satellites are loaded into Falcon 9 rockets[/caption]

If you want to watch the launch in real time there should be a livestream on SpaceX’s YouTube channel.

This launch was originally planned for earlier in the week but had to be pushed back due to weather conditions.

How to track Starlink satellites in real-time

Not sure where to look? Your phone’s got you covered.

There are a number of stargazing apps you can use to follow the path of Starlink probes.

On the Apple App Store, we’d recommend Night Sky, which is free and helps you find all kinds of celestial wonders.

For Android fans, Satellite Tracker should do the trick (it’s also available on iPhone).

Simply head outside at one of the scheduled Starlink times above, load up one of the apps and you should be able to spot one.

Alternatively, you can visit the Find Starlink website (or the “Find Starlink Satellites” app) and enter your location.

SpaceX has already launched several batches of the satellites[/caption]

How the probes will affect the night sky is causing concern as they sit in a low orbit, so appear brighter than stars and planets.

Is Starlink ‘blocking’ the night sky?

The Starlink programme is controversial among astronomers, who have slammed Musk’s hare-brained scheme.

They say Starlink gets in the way of observations due to light reflected off the the satellites.

University of Western Ontario meteor researcher Denis Vida stated in a blog post last year: “One has to be concerned how will our skies look like when hearing that there are plans to launch a total of 42,000 satellites.

“This might completely deny us to do any optical meteor observations as soon as 2024.”

Never one to take something lying down, Musk has lashed back at his critics, claiming the satellites have no such impact.

Speaking at a conference in Washington DC last month, he said: “I am confident that we will not cause any impact whatsoever in astronomical discoveries. Zero. That’s my prediction.

SpaceX engineers are also said to be looking into making the satellites a bit less shiny so they won’t reflect the sun as much.

Have you ever seen a Starlink satellite in the sky? Let us know in the comments…