Avid stargazers will be able to watch live via a SpaceX YouTube link that’s currently counting down to the launch.

Falcon 9 is vertical on LC-39A ahead of our tenth Starlink mission, targeted for tomorrow at 11:59 a.m. EDT. Vehicle and payload look good; weather is 60% favorable → https://t.co/bJFjLCzWdK 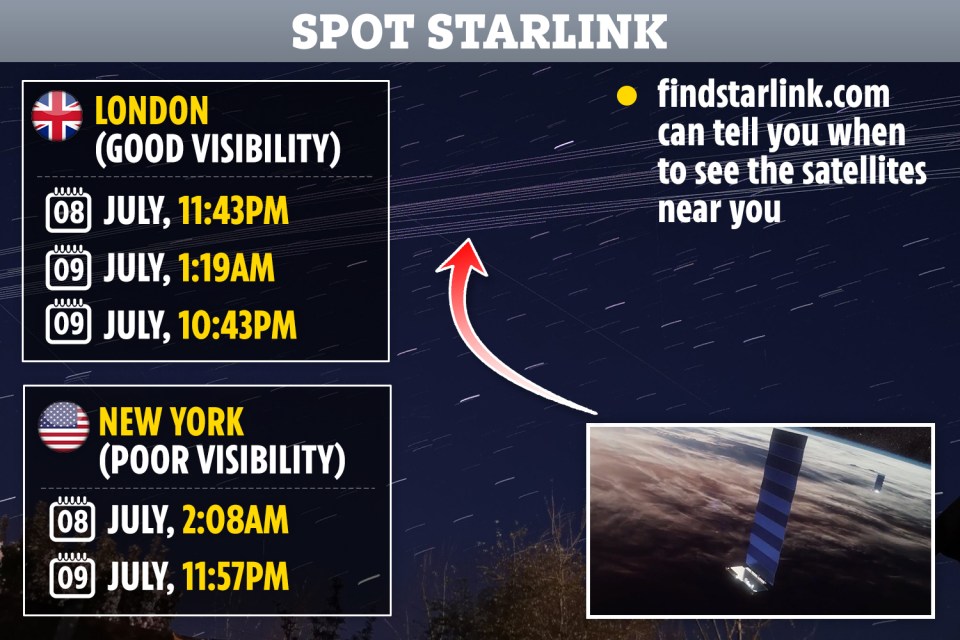 The launch is scheduled to take place today at 11:59am ET.

The Starlink satellites will launch onboard a Falcon 9 rocket from the Nasa Kennedy Space Center site in Cape Canaveral in Florida, US.

Nasa’s website states: “SpaceX is scheduled to launch Starlink satellites from a Falcon 9.

Starlink satellites can be spotted without a telescope[/caption]

“This will be the 10th mission in support of the constellation of networked satellites known as Starlink.

“The goal of Starlink is to create a network that will help provide internet services to those who are not yet connected, and to provide reliable and affordable internet across the globe.”

SpaceX is known for postponing its launches at the last minute.

A recent tweet from the company said the weather was looking 60% favourable.

The last Starlink launch took place on June 3 at at 9:25 pm EDT[/caption]

If you want to see Starlink satellites in the sky with your own eyes then try visiting the Find Starlink website (or the “Find Starlink Satellites” app) and enter your location.

This will provide you with good times to see them in your area.

Starlink satellites are more visible just after a launch.

The Find Starlink website now has a message which states: “Hi there, unfortunately the older Starlink satellites are now difficult to see, as the company operating them has taken steps to reduce their brightness (to avoid disturbing astronomers).

“But on some rare occasions, those older Starlinks are still very bright, and some people are still able to see it everyday.

“So you can still try this app, and if you’re lucky it’ll be bright enough to be visible!

“The next Starlink launch is planned for July 8, and those new Starlinks will be very bright for a few days after that.”

How to track Starlink satellites in real-time

Not sure where to look? Your phone’s got you covered.

There are a number of stargazing apps you can use to follow the path of Starlink probes.

On the Apple App Store, we’d recommend Night Sky, which is free and helps you find all kinds of celestial wonders.

For Android fans, Satellite Tracker should do the trick (it’s also available on iPhone).

How the probes will affect the night sky is causing concern as they sit in a low orbit, so appear brighter than stars and planets.

In other space news, Comet Neowise is visible with the naked eye this month.

Venus will be shining at its brightest this week.

Have you ever seen a Starlink satellite? Let us know in the comments…

'No WAY LeBron is eating this...