THE US military wants to ship cargo to battlefields around the world using rockets built by Elon Musk’s SpaceX.

The bonkers plan would see supplies fired into space from the US before soaring back to Earth, giving generals the ability to send weapons anywhere on the planet within an hour. 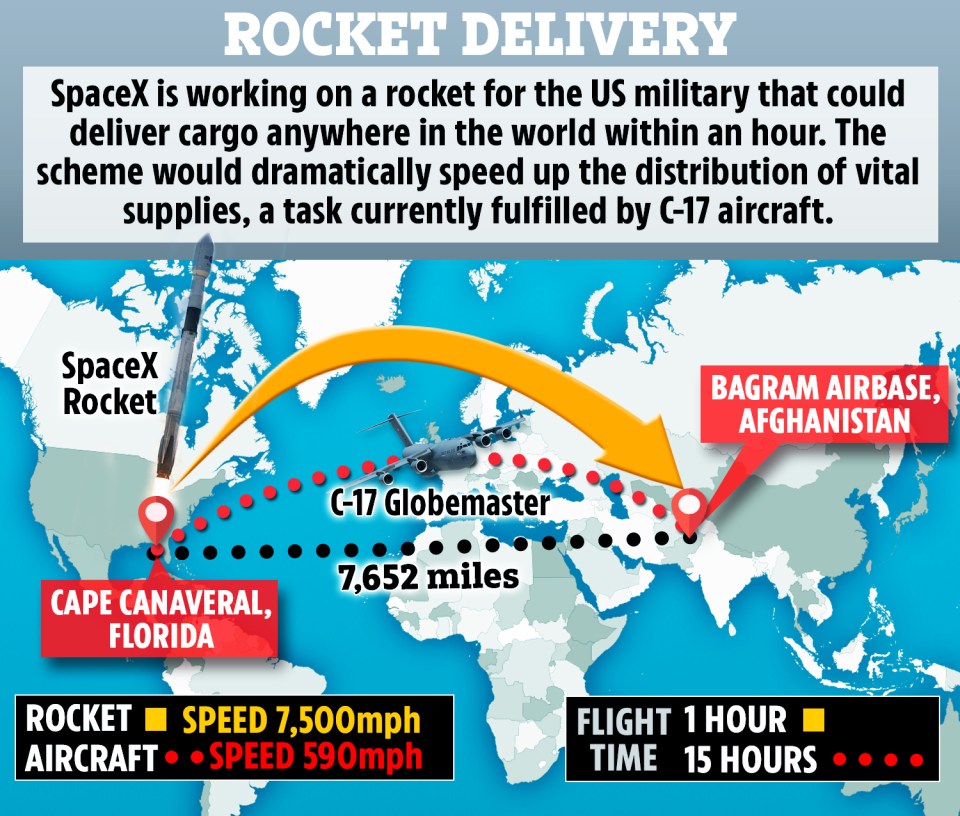 It would dramatically speed up the distribution of vital supplies, a task currently fulfilled by huge C-17 Globemaster aircraft.

The US military has a 233-strong fleet of the planes that can fly at up to 590mph, but they’re no match for a supersonic rocket.

SpaceX’s partnership with the military includes Texas aerospace firm xArc and was announced by US Transportation Command’s General Stephen Lyons on Wednesday.

The rocket will boast an 80-ton payload – similar to a C-17 – and will ferry supplies including weapons from Cape Canaveral, Florida, to the US-run Bagram airfield in Afghanistan in under an hour.

SpaceX regularly launches payloads to the International Space Station for Nasa, as well as satellites for the NSA and various telecoms giants[/caption]

The scheme would dramatically speed up the distribution of vital military supplies, a task currently fulfilled by C-17 Globemaster aircraft[/caption]

By comparison, a C-17 aircraft would take roughly 15 hours to complete the same journey.

“Think about the speed associated with that,” General Lyons said at the National Defense Transportation Association virtual conference.

“I can tell you SpaceX is moving very, very rapidly in this area. I’m really excited about the team that’s working with SpaceX.”

The plans are still in the early stages, but proof-of-concept tests are expected to begin next year.

The group’s first task will involve assessing the costs and logistics of such an operation.

According to Space.com, SpaceX flights cost between $2million and $90million, depending on the rocket.

However, that’s expected to drop to as little as $2million for launches of its upcoming Starship rocket, which will be fully reusable.

However, the US firm has never attempted a landing with cargo on board. The military rocket would carry four times the payload of the Falcon 9.

SpaceX, which is based in Califrnia, is increasingly partnering with the military on its hair-brained schemes.

SpaceX boss Elon Musk has previously discussed plans to use rockets to carry passengers on super-fast trips to destinations around the globe.

In other news, Elon Musk’s Tesla roadster that he launched on a SpaceX rocket three years ago has just flown past Mars.

SpaceX successfully launched astronauts into space for the first time earlier this year.

The company dramatically blew up a rocket tank last month as part of key tests for its upcoming Starship rocket.

What do you think of the military rocket plans? Let us know in the comments!

Nasa probe to reveal secrets of do...