A DISORIENTATED deer was found in the US with hair growing out of its eyeballs.

The poor animal suffered from a condition that causes thick hair follicles to sprout from discs of flesh on the cornea of its eyeballs.

The hairy eyeball can be seen here[/caption]

According to The National Deer Association, the white-tail deer was found in the town of Farragut in Tennessee.

It was suffering from a medical problem called corneal dermoids.

Dermoids are non-cancerous tumours that result in animal tissue growing in the wrong area of the body.

In this case, skin tissue was growing growing over the deer’s eyeballs and even had hair follicles which produced hair.

The deer was reported to the Tennessee Wildlife Resources Agency when it was spotted bleeding and disorientated in the middle of a road.

According to The National Deer Association, the official report read: “The individual stated the deer was circling, had visible bleeding, lacked awareness of the people around it, and had something on its eyes”.

Sterling Daniels, a wildlife biologist, told the association: “It maybe could tell day from dark, but I wouldn’t think it would be able to see where it was going.

“I’d compare it to covering your eyes with a washcloth. You could tell day from night, but that’s about it.”

The deer was also found to have epizootic hemorrhagic disease (EHD), meaning it was even more disorientated and had no fear of humans.

EHD causes fever and tissue swelling and can be fatal.

The skin and hair on its eyes were thought to have grown gradually enough for the deer to get used to seeing with very limited vision.

The condition probably started in the womb and got worse after birth.

That’s how it likely survived to be one and a half.

Unfortunately, the EHD also shortened its lifespan because the disease has no cure.

Humans can also develop dermoids on their eyes.

They can be removed for cosmetic reasons but eyesight will remain damaged.

And, the infamous Loch Ness Monster could have been an ancient sea turtle, according to a top scientist.

What are your thoughts on the hairy-eyed deer? Let us know in the comments… 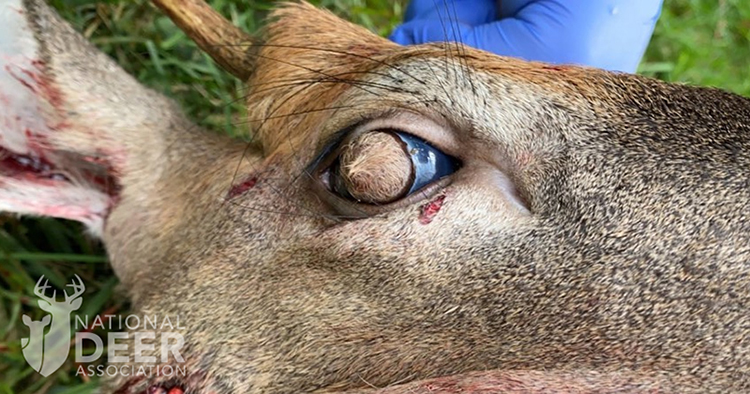