THE government has pumped £400million into a failed satellite company that plans to one day beam the internet to people from space.

Bankrupt US firm OneWeb already has 74 satellites in orbit and plans to one day put as many as 42,000 up there as part of a “mega-constellation”. 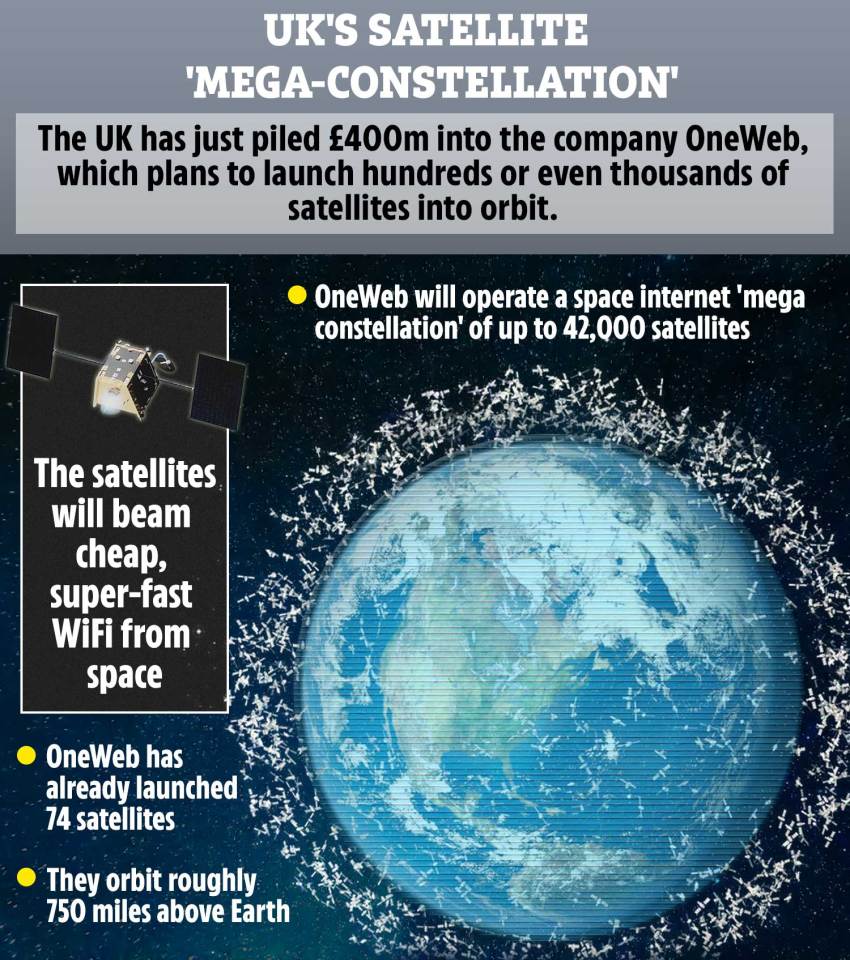 Announced Friday, the move means the UK is part of is part of a consortium with India’s Bharti Global which won a bidding war for the company.

Ministers hope it will compensate for the loss of access to the EU’s Galileo programme in the wake of Brexit.

The Department for Business, Energy and Industrial Strategy said the UK and mobile operator Bharti are each investing $500million (£400million), with Britain acquiring a “significant equity stake” in the company.

Officials said the deal would put the UK at the “cutting-edge of the latest advances in space technology”.

It will enable OneWeb – which has its headquarters in London – to complete the construction of a constellation of Low Earth orbit satellites providing enhanced broadband and other services to countries around the world.

“Our access to a global fleet of satellites has the potential to connect millions of people worldwide to broadband, many for the first time.

“The deal presents the opportunity to further develop our strong advanced manufacturing base right here in the UK.”

In a statement, OneWeb – which has its manufacturing base in Florida – said the deal would enable the company to emerge from bankruptcy with a “robust foundation” to continue its commercial operations.

“The commitment of HMG accelerates and enhances OneWeb’s global access,” it said.

“OneWeb will contribute to the UK Government’s ambition to join the first rank of space nations, along with its commitment to making the UK the world’s leader in science and research and development.”

The 11th hour bid to acquire a stake in the firm was reportedly signed off last week by Boris Johnson and Chancellor Rishi Sunak.

Ministers are said to be now seeking to secure additional finance to revive the business which was planning to launch 650 satellites.

The Prime Minister’s official spokesman said: “The deal will support the UK to be a pioneer in the research, development, manufacturing and exploitation of novel satellite technologies, while boosting UK manufacturing.

“The deal will enable the company to develop technology to provide enhanced broadband and other services to mobile and fixed IT terminals in the UK and countries around the world.

“It will also allow the UK to explore other potential strategic opportunities working with our international allies.”

The deal remains subject to approval by the US Bankruptcy Court, as well as regulatory approvals.

OneWeb will compete with Starlink, a satellite project spearheaded by US rocket firm SpaceX that also aims to set up a mega-constellation.

Bankrolled by billionaire Elon Musk, Starlink hopes to provide cheap, reliable WiFi to people across the globe. It has launched almost 500 satellites so far.

Have you ever seen a Starlink satellite in the sky? Let us know in the comments…

Iran says cause of mysterious inci...

Why did Amazon change their lo...