MAC computers are about to get a major update – and it’s going to be the biggest change in years.

We’ve got all the info on macOS 11 Big Sur that you need, including release date news and rumours, features, compatibility and more.

But 2020’s update is one of the biggest in years, because it makes so many changes.

It also marks the long-awaited leap from macOS 10/ macOS X to macOS 11, which launched way back in 2001.

Apple macOS Big Sur release date – when is macOS 11 out?

Sadly, we still don’t have a confirmed release date for the new update.

We’re very deep into the macOS 11 beta, so it’s likely that a release could be just days away.

Apple is hosting a special event on November 10, which may include more details about a Big Sur release – or possible even mark the launch.

It’s worth also noting that Big Sur comes as a completely free upgrade – just like iOS.

Apple Maps is getting major changes in Big Sur[/caption]

Apple has already revealed the list of device that will get the macOS Big Sur upgrade.

If you’ve got an older Mac model then you simply won’t be able to upgrade to Big Sur. Sorry!

The main change is a major design overhaul, which apple is calling the biggest since macOS 10.

“Everything from the curvature of window corners to the palette of colours and materials has been refined, and new features provide even more information and power.

“Icons in the Dock have been thoughtfully designed to be more consistent with icons across the Apple ecosystem while retaining their Mac personality.

“Buttons and controls appear when needed, and recede when they’re not

Apple says this is the biggest Mac redesign in years[/caption]

There’s an all-new Control Centre, Notification Centre, and a new design for the core Apple apps.

Safari has received a big upgrade with faster performance and improved battery life for MacBooks.

The iPhone’s redesigned Apple Maps is also coming to Mac, with new features like Guides, 360-degree Look Around view, and some indoor maps for places like airports and shopping centres.

And Apple says there are some important privacy changes too, including revealing the types of data apps collect before you download them.

It’ll also flag if that data is shared with third parties for tracking. 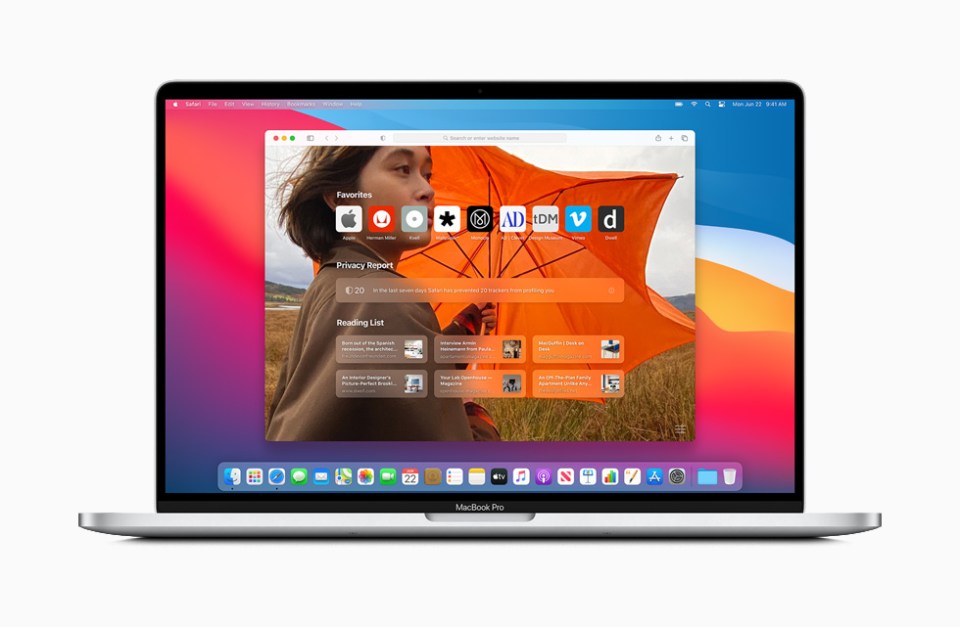