BENTLEY is a byword for luxury and comfort – but it’s hard to get blissful silence from a V6.

So I was surprised and delighted to find myself gliding silently around West Sussex in the new Bentley Bentayga Hybrid last week.

The new Bentley Bentayga Hybrid is a masterpiece[/caption]

It’s absolutely enormous – but it shockingly sporty to drive[/caption]

The cabin is Bentley through and through – you’ll dread arriving at your destination, because it means leaving the car[/caption]

Shocked, I was. After all, it’s a 2.6-ton behemoth stretching nearly 17 feet from front to back.

And with an explosive 3.0-litre engine at its core, you’d expect nothing but noise.

But Bentley’s glorious Bentayga Hybrid also has a 94kW electric motor – and a dedicated EV mode to go with it.

So you can get right up to 84mph using electric without making a peep.

In some ways, it feels like how Bentley cars should always have been.

Grand, spacious cabins that charge unstoppably down the carriageway without a raucous engine shaking you to attention.

Of course, the Bentayga Hybrid is a premium beast, coming in at around £155,000.

So savvy motorists will enjoy the fact that the engine can – and does – roar to life with a slam on the pedal, or in Sport mode, or when you’re taking it to the 90mph’s and beyond.

In fact, it’ll go right up to 158mph, delivering a staggering 443 brake horsepower – with a twisty 700Nm of torque on offer.

Simply put, it’s as fast as you’d expect from a Bentley, and indeed from a car that costs this much.

It paces away at roundabouts as if it were half the weight, and handles on country lanes like it’s half the height.

Everything is effortless – and it should be, given the price.

Bentley has performed endless miracles to make this enormous all-wheel-drive SUV feel sports and agile while retaining all the elements of luxury you love.

Bentley inside and out

So it’s fast. But it’s also got all the interior joy you’ve come to expect from Bentley too.

The cabin is slick and polished, roomy and comfortable, and filled with light thanks to an optional sunroof.

There’s a heated steering wheel, dedicated climate zones, chairs that can warm up or cool down, and some of the most generous cupholders I’ve ever plonked a beverage in.

You’ve got a custom infotainment system from Bentley, realised on a pin-sharp 10.9-inch touchscreen.

It’s easy to navigate, and thankfully doesn’t replace all the usual physical controls. So you can still control temperatures and drive modes with proper buttons and dials. Don’t fix what’s not broken.

The Bentayga also ticks my box of having Apple CarPlay.

It instantly connects to your iPhone, giving you access to the maps and apps you’re already familiar with.

But there’s also joy to be had from Bentley’s own system.

For instance, if you use Bentley’s navigation, you get access to special adaptive hybrid drive mode.

This will analyse your planned route, and work out the most efficient way to manage drive functions throughout.

So it’ll know the best times to save EV, and when you might want to save that charge and use the turbocharged V6 instead.

It’s a clever system, but does mean you’ll have to resist the endless temptation of whacking it in Sport and powering down every single road.

And if you’ve bought a brand new Bentayga, you can probably foot the fuel bill.

Thankfully, the hybrid powertrain means that the Bentayga is surprising efficient.

During pre-drive shenanigans, I heard whispers of Bentayga regulars reaching 60 miles to the gallon – incredible, for its size.

Bentley says that Bentayga Hybrid can achieve a combined range of 536 miles, which is brilliant.

In electric only, it will get you 25 miles – which is par for the course when it comes to hybrid SUVs.

You’ll recharge the smaller battery in no time compared to a proper EV.

But Bentley says you’re looking at 6.25 hours to full at a domestic charger – that’s the 3-pin plug at your home.

Thankfully that means you can get a full charge easily overnight.

At this point, I wonder if I’m dreaming.

Here is a car that is fast, luxurious, efficient(-ish), and outlandishly beautiful. Is there anything at all wrong with it?

The six-figure price tag quickly brings me back down to earth, but it seems on the cheap side, given how slick this motor is.

So if you’ve got the cash, you’ll feel like you’re always in Bentley’s swish and tranquil dreamworld. What’s more luxurious than that?

It’s an effortless drive: easy to control at all speeds, and with plenty of power for a mammoth SUV[/caption]

In EV mode, you won’t even hear this gargantuan Ritz-on-wheels coming[/caption]

In other news, the new Lamborghini Huracan Evo can clean your house and sort your dinner.

The new Porsche Panamera has “night vision” and even does Shiatsu massages.

Ford’s Mustang Mach-E is the electric car of your dreams.

Jaguar’s hybrid F-Pace may be the perfect car.

And Audi’s Q7 hybrid is huge, terrifyingly fast and filled with sci-if tech. 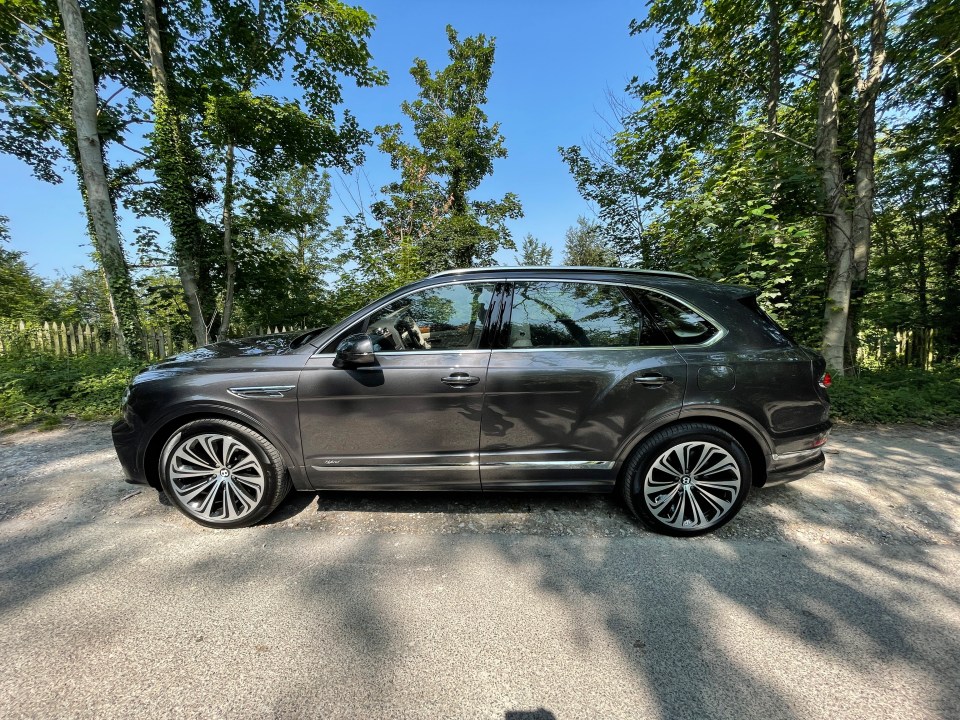