AN ASTEROID the size of a car has zipped past Earth in what scientists say is the closest flyby on record.

Nasa has admitted it didn’t see the space rock coming ahead of a near-miss on Sunday that took it within 1,830 miles (2,950km) of our planet. 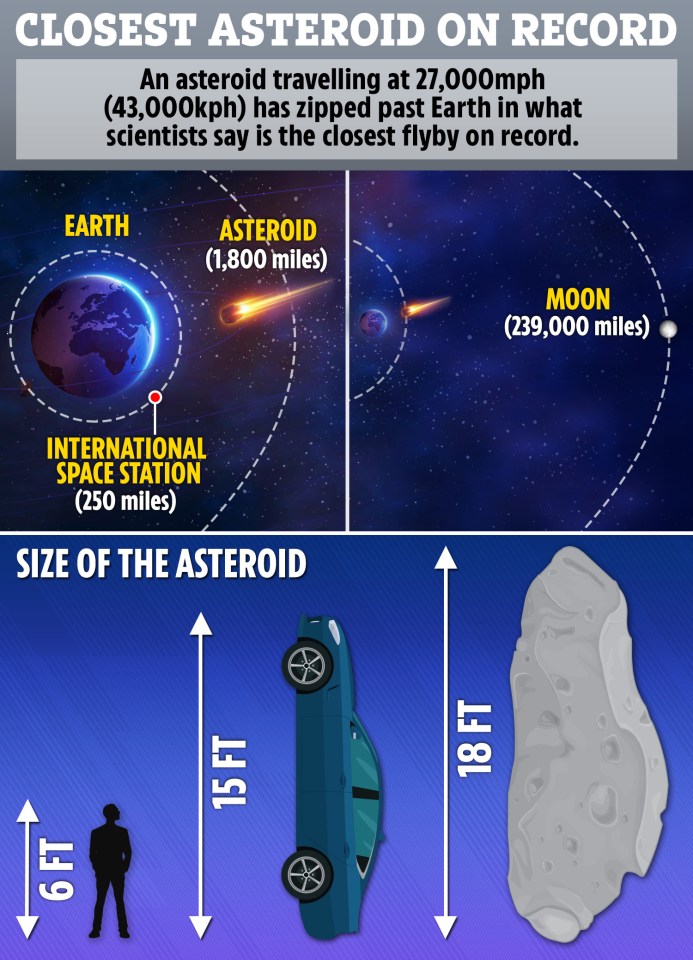 “The asteroid approached undetected from the direction of the Sun,” Nasa’s Dr Paul Chodas told Business Insider. “We didn’t see it coming.”

The Palomar Observatory in California first detected the rock, now known as 2020 QG, six hours after it flew over the southern Indian Ocean at 5:08am BST (12:08am ET) on August 16.

If it had crossed paths with our planet, QG would have burned up harmlessly in the atmosphere.

The flyby has soared into the record books, however, beating the previous holder of 7,800 miles (12,600km) set in 2019, according to Nasa’s Jet Propulsion Laboratory.

“It’s really cool to see a small asteroid come by this close, because we can see the Earth’s gravity dramatically bend its trajectory,” said Dr Chodas.

“Our calculations show that this asteroid got turned by 45 degrees or so as it swung by our planet.”

Nasa had admitted it did not see the asteroid coming[/caption]

Nasa constantly tracks asteroids and other “near-Earth objects” to watch for those on a collision course with our planet.

The space agency has been tasked with finding 90 per cent of rocks that pose a significant threat to Earth.

Those “killer” asteroids are typically 460 feet across (140m) or bigger and are easy to spot from a distance.

The telescope constantly takes pictures of the night sky. Asteroids often form streaks across these images, which are then passed on to researchers.

Only a handful of asteroids of this size pass this close to Earth each year, Nasa said, and they’re extremely hard to detect.

“It’s quite an accomplishment to find these tiny close-in asteroids in the first place, because they pass by so fast,” Dr Chodas said.

“There’s typically only a short window of a couple of days before or after close approach when this small of an asteroid is close enough to Earth to be bright enough but not so close that it moves too fast in the sky to be detected by a telescope.”

In other space news, Nasa recently snapped a stunning image of a 2,000-foot dust whirlwind raging across Mars.

Mars may have taken as long as 20million years to form, scientists now claim.

And, Nasa has revealed the design of a moon lander that could be taking astronauts back to the lunar surface by 2024.

What are your thoughts on our asteroid near-miss? Let us know in the comments…