DO aliens really exist? This question has caused debate and controversy among humans for centuries.

The US government’s unclassified report on Unidentified Flying Objects (UFOs) is expected to be released to Congress before the end of June 2021.

What was the latest believed UFO sighting?

Strange footage has emerged of a mysterious UFO moving and changing shape in the sky over Sweden.

The intriguing footage was captured by baffled motorists inside the city of Gothenburg which sparked rumors of whether the footage is conclusive proof of extra-terrestrial life.

The footage, captured by onlookers traveling in their car, shows an unidentified flying object move through the sky and appear to change shape.

Russian police have reopened a 60-year-old investigation into the mysterious deaths of nine students on a cross-country ski trip, and are linking the deaths to a theory that blames UFOs.

Known as the Dyatlov Pass Incident, the mystery includes a sliced open tent, bodies dressed in underwear in the snow, traces of radiation, and a victim missing a tongue, reported ABC.

The lack of explanation for the deaths sparked conspiracy theories including yetis, UFOs, and an attack by local native tribes.

When will the UFO report be released by the Pentagon?

It could even be made public today, Thursday June 24, or tomorrow , according to CNET.

But, the Washington Post warned, it might be delayed as “agencies have missed similar congressional reporting deadlines in the past; and the provision is not technically binding”.

Lawmakers demanded the findings be released after some 120 incidents over the past 20 years were reported by US military.

The sheer number of what the Pentagon terms Unidentified Aerial Phenomena (UAP) has made it a serious issue.

How many alien and UFO sightings have there been?

The number of UFO sightings is currently flying at an all-time high, according to data cruncher and blogger Sam Monfort.

The alien expert reckons there have been more than 100,000 recorded UFO sightings in the past 100-plus years.

And Sam is far from the only believer on our planet.

From an “alien autopsy” video dating back to 1995 to a video of fighter jets apparently chasing a UFO over the M5, there are hundreds of videos that people have claimed to be proof of alien life.

There’s even a clip of a UFO supposedly attacking a Taliban compound, as well as “sightings” in Peckham and Warminster.

Most of the videos have been debunked by experts. In the M5 clip, for example, the motorway lorries look like models.

He added that “true believers wouldn’t be dissuaded” by evidence the videos are fake.

Meanwhile, popstar Peter Andre claims to have seen “several UFOs” on a family trip to the Nevada desert.

The desert is also the site of America’s famous Area 51 – a highly classified military base at the centre of alien conspiracy theories due to scores of of UFO sightings in the area.

Artist Dave Huggins believes he lost his virginity to a busty alien called Crescent – and has fathered 60 ‘hybrid’ babies.

Some people even believe this picture of Jesus’ crucifixion – which hangs on the walls of the Svetitskhoveli Cathedral in Georgia – is proof that aliens visited Earth thousands of years ago.

In July 2017, new research was published that suggested “free-floating” earth sized plants could exist and that some of them may even be able to harbour life.

And at the end of August, alien hunters from the Breakthrough Listen project detected “fast radio bursts” coming from a mysterious cluster of stars – which may have been produced by “extraterrestrial civilizations”.

In October 2017, an Australian woman took a picture of what she believed was a “flying saucer” hovering over the Great Barrier Reef.

Far North Queensland is considered a UFO hotspot, with several sightings of mystery aircraft in the sky over several decades.

A UFO shaped like a tic-tac stalked a US Aircraft carrier for days before vanishing into thin air, according to a Pentagon report which emerged in May, 2018.

The object – which could reportedly hover in mid air and make itself invisible – bamboozled US Navy fighter pilots during a training exercise in the Pacific Ocean in November, 2004.

In July 2018 a secret dossier revealed that British spies spent at least 50 years hunting UFOs in the hope of stealing alien technology.

What is the Roswell UFO incident?

The Roswell UFO incident is a world-renowned conspiracy theory about the existence of aliens.

In the summer of 1947, a farmer discovered unidentifiable debris in his sheep fields just outside Roswell, New Mexico.

A local Air Force base claimed the debris came from a crashed hot air balloon, but many people reckon it’s really the remains of a flying saucer.

The debate rumbles on, with people continuing to make claims about “leaked US government documents”, which supposedly prove it was a cover-up.

In October 2017 a video emerged that was alleged to be of the “body of an alien carried away on a stretcher after the Roswell UFO crash”.

Another Roswell sighting was on February 24, 2018.

What happened at Rendlesham Forest?

Dubbed the “British Roswell”, a similar incident happened in Rendlesham Forest in 1980.

On December 26, military personnel from RAF Bentwaters and RAF Woodbridge, in Suffolk, saw strange lights in a nearby forest – and three of them were sent out to investigate.

Two of them encountered a small, triangular shaped craft – which they later drew images of.

One man, Jim Penniston, got close enough to touch the side of the object.

Two nights later, Deputy Base Commander Lieutenant Colonel Charles Halt and his team also encountered the UFO – and were left baffled by the entire experience.

In January 2018, unseen footage revealed former base commander Charles Halt made explosive claims that airmen involved in the case “may have been abducted by aliens“.

Are there any other alien conspiracy theories?

Marilyn Monroe’s death remains shrouded in mystery, and a new conspiracy theory claims the actress was murdered by the US government after threatening to reveal top-secret information about aliens.

The bonkers theory was revealed in UFO documentary Unacknowledged.

It is claimed that Marilyn made the threats after having affairs with both President JFK and Bobby Kennedy, and was seeking revenge as they both simultaneously ended things with her.

In September 2017, we also reported on the brother and sister alien hunters who discovered a “UFO highway” across America.

Chuck Zukowski and Debbie Ziegelmeyer have spent years travelling across the US investigating hundreds of UFO sightings and other paranormal occurrences.

The pair believe that the 37th latitude line is a kind of UFO or paranormal “highway” along which extra terrestrial craft enter and exit the earth.

Their theory is now the subject of a book called the 37th Parallel, written by Ben Mezrich.

Chuck told Sun Online: “Back in 2006 I was looking at my cattle mutilation investigations – there were huge similarities between them all – most of them were laying on their right side, they’re laying east to west and then I noticed that lots of them were on the 37 degree latitude.

“I called my sister at midnight and I said, ‘Didn’t you have cattle mutilations on the 37 degree latitude in Missouri?’

“And she said, ‘Yes’ and we started looking more into it. We soon realised it wasn’t just cattle mutilations – there were all kind of events.

“We’re up until 2.30 in the morning going through all these cases and started seeing these amazing patterns.”

The 37th latitude line runs from California through Nevada, Colorado, Kansas, Missouri, Illinois, Kentucky and across to Virginia.

Meanwhile it has also emerged Paul O’Grady is too terrified to go to sleep just in case he wakes up surrounded by aliens.

The 62-year-old presenter even fears he is being watched by extra-terrestrial beings from outer space after first realising it when listening to an interview with 80s pop singer Kim Wilde.

What has Buzz Aldrin said about aliens and UFOs?

In April 2018, it was reported that Buzz Aldrin, along with three other astronauts, had passed lie detector tests over claims they had experienced alien encounters.

Allegedly, Aldrin, Al Worden, Edgar Mitchell and Gordon Cooper all took part in the study which took place at the Institute of BioAcoustic Biology in Albany, Ohio, the Daily Star reported.

Aldrin, now 88, claimed he saw a spaceship on his way to the moon, adding: “There was something out there that was close enough to be observed… sort of L-shaped.”

The tests, reportedly more reliable than standard lie detector tests, showed he was telling the truth.

What has Nasa said about aliens?

Nasa is the expert in space activity, but it has remained notoriously tight-lipped when it comes to alien life.

However, Nasa was previously forced to deny claims from hacking group Anonymous that an alien announcement was imminent.

To date, there is no evidence of life beyond Earth but, when it comes to unexplained events, the finger is often pointed at alien activity.

Experts listening in at the Arecibo Observatory in Puerto Rico were on a planet spotting mission when the strange “pulses” came over the radio between April and May 2017.
It wasn’t until two weeks after the project finished that they noticed the strange signals which came from Ross 128 (GJ447), some 11 light years away, on 12 May at 1.53 AM (BST).

NASA announced it has discovered a new planet in a far off solar system in December 2017.

They told of a new discovery by its Kepler telescope – a new planet in a far-off solar system which lies within the habitable zone.

The planet, called Kepler 90 i, proves that stars can have their own solar systems and is “a really successful discovery”. 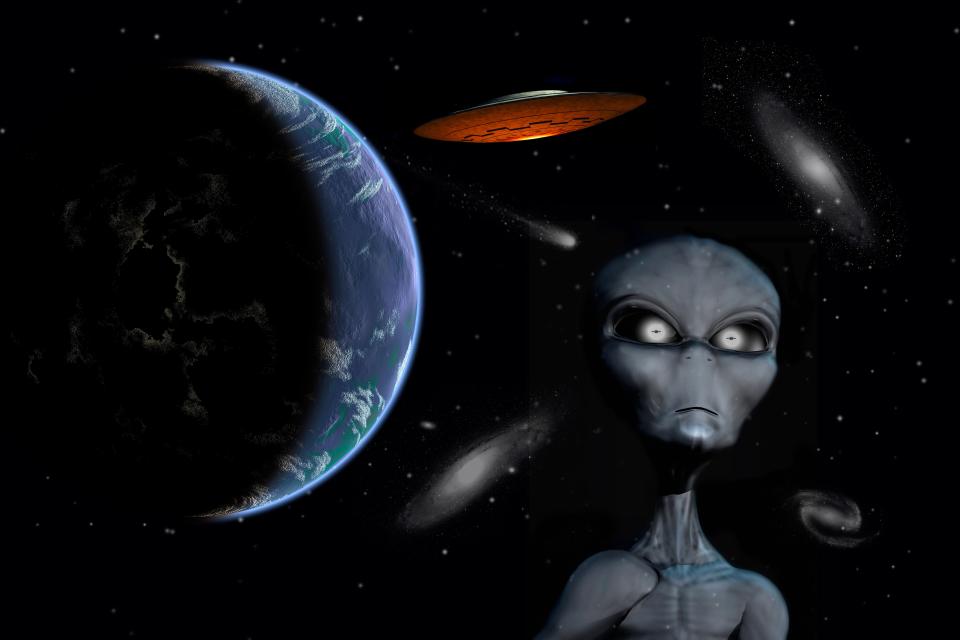