THE Arctic “hasn’t been this warm for three million years”, according to scientists who have been studying CO2 emissions.

This claim comes after this year’s annual low point of sea ice in the Arctic was the second lowest since satellite records began over 40 years ago.

Researchers from the University of Massachusetts Amherst recently published an article in The Conversation explaining how carbon dioxide levels in the atmosphere are “higher than at any other time in human history”.

They are part of a team of scientists who studied ancient sediment cores from northeast Russia.

They found that levels of CO2 in the atmosphere haven’t been this high since the Pliocene Epoch era which was three million years ago.

According to their research, rising greenhouse gas emissions could see us living with Pliocene conditions again including higher sea levels and changes to our weather.

The researchers think the Arctic actually reached much warmer levels than today in the Pliocene era and had warmer oceans and coastlines that were further inland.

They wrote: “The areas that are now California’s Central Valley, the Florida Peninsula and the Gulf Coast all were underwater.

“So was the land where major coastal cities like New York, Miami, Los Angeles, Houston and Seattle stand.”

They also note how weather conditions similar to the Pliocene Epoch would change agriculture.

Some experts think the Pliocene had similar levels of CO2 to what we have today because of natural processes that occurred at a much slower pace than our current climate change.

These processes include rock weathering releasing CO2 and tectonic plate movements pushing more rock to the surface and increasing the amount of rock weathering.

Today human activity is thought to be releasing CO2 into the atmosphere at a much faster rate than in the Pliocene era.

Since the Industrial Era in 1750, it only took humans just over 200 years to return the planet to CO2 levels not seen for millions of years.

Most of this shift is said to have happened after WWII.

The scientists wrote in The Conversation: “Since roughly 1880 the planet has warmed by 1 degree Celsius (2 degrees Fahrenheit) – many times faster than any warming episode in the past 65 million years of Earth’s history.”

They also highlighted how other experts think the Arctic will be completely ice free within two decades.

They suggest big steps like decreasing fossil fuel use to try and compact the issue.

Other studies have questioned the connection between CO2 levels and the warm Pliocene climate including one by Nasa researchers.

It stated: “Neither simulation results or data support the conclusion that Pliocene warming was caused entirely by a large increase in atmospheric CO2 content.

“We cannot rule out, however, that some combination of the altered CO2 and altered ocean heat transport caused the warmer climate of the middle Pliocene.”

In other news, melting ice in the Antarctic will raise sea levels by 2.5 metres even if the Paris agreement climate goals are met, according to a new study.

And, global warming is still hotting up as Covid makes it harder to monitor, a report warns.

What are your thoughts on Arctic warming? Let us know in the comments… 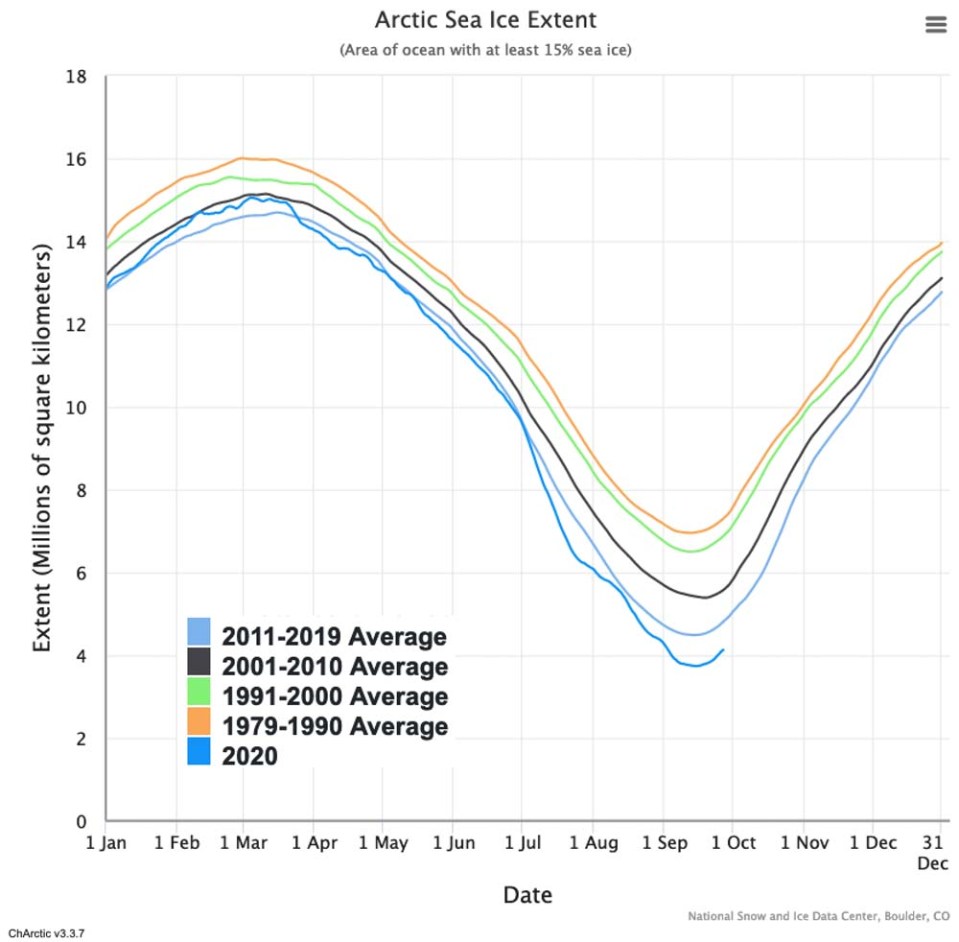