A HUGE redesign of the beloved Apple AirPods have been revealed at Apple’s latest event.

The revamped wireless earbuds were widely expected to launch this week and Apple has confirmed these rumours to be true.

Back in September, Apple held a major event where it unveiled the iPhone 13, a new iPad and 2021 iPad Mini, and the Apple Watch 7.

But a refreshed pair of AirPods was nowhere to be seen, leaving fans disappointed.

Apple’s October event has revealed the ‘missing’ 3rd Generation AirPods in all their glory.

Rumours about the AirPods getting support for MagSafe and wireless charging have been confirmed as true.

The 3rd Generation AirPods also have a host of other features and even a new design.


Google Maps man carves ‘indecipherable riddle’ – can you crack it?

What are the 3rd Generation AirPods features?

Apple has promised more control of your music and phone calls with improved sensors.

It said the 3rd Generation AirPods can provide a powerful base and “crisp, clean, high frequencies”.

The AirPods are sweat and water resistant.

They’ve also got a new contour design that delivers sound directly to your ears.

Sound should be customised for you in real time so you can listen to music as it was intended to be heard.

Spatial Audio should also allow the AirPods to give you an immersive sound experience.

There’s also a one touch setup, which will automatically pair your AirPods to other devices.

The case will give you an additional four full charges.

MagSafe and wireless charging have been added to the case.

There’s also a one touch setup, which will automatically pair your AirPods to other devices.

The case will give you an additional four full charges.

How much are the 3rd Generation AirPods?

You can order them today on the Apple website.

They will be avaliable in store on October 26.

Apple launched the AirPods back in 2016, releasing a second-generation in 2019.

Standard AirPods have since become a cultural icon and coveted accessory – and are now commonly seen around the world.

Some AirPods models offer wireless charging, so better support for MagSafe is great news for fans.

The 3rd Generation AirPods don’t have the Pro feature of noise cancellation.

Looking for a discount on Airpods? Check out our Black Friday Airpods deals page. 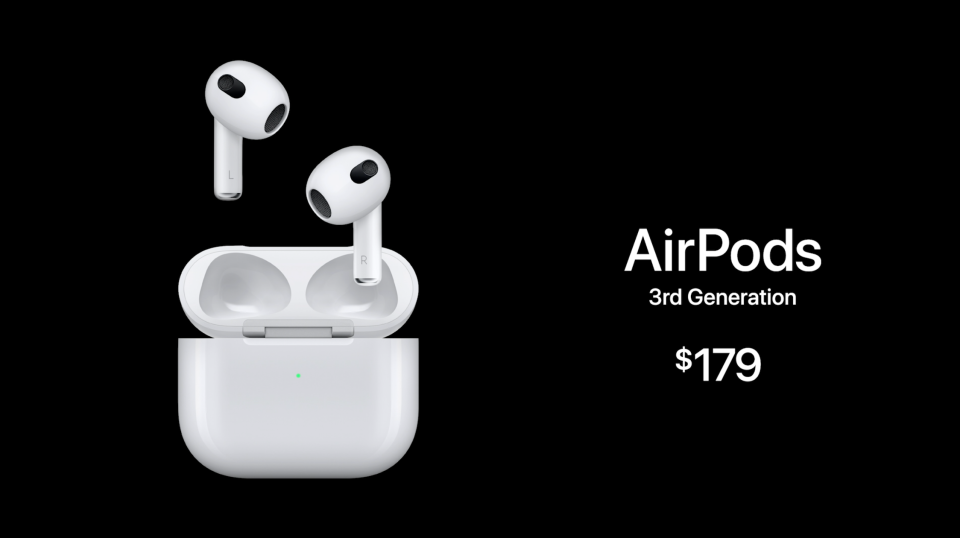