SWARMS of locusts are plaguing East Africa as the country continues to battle the global pandemic.

Trillions of the insects have been destroying crops from Kenya through to Ethiopia, Yemen and even as far as parts of northern India.

The huge swarms run the risk of causing famines and damaging economies if they are not kept under control.

Entomologist Dino Martins told the Harvard Gazette: “As terrifying and as dramatic as they are, there is a deeper message, and the message is that we are changing the environment.”

He thinks factors like deforestation, overgrazing from cattle farming and expanding deserts are all helping the locusts to breed in excessive numbers.

Then in April 2020 they struck again in their trillions.

Now, scientists are expecting the third generation to swarm Africa this July in even larger numbers.

The problem is largely tackled with pesticides[/caption]

Martins told the Harvard Gazette: “When you’re in a swarm, especially if it’s just as they’re getting moving, it’s actually quite an incredible experience.

“You see, they change colour when they’re young – they’re more pinkish and then as they mature they become yellow – so when they are flying around you at that stage, you have all these pink and yellow wings whirring around and a slightly nutty smell of the locusts surrounding you and lots of birds feeding on them.”

Scientists are concerned that current solutions, such as spraying pesticides from helicopters, are not doing enough and can be harmful to human health and the environment.

According to the Food and Agriculture Organization (FAO), more than half a million hectares of land in the region has been sprayed with pesticides so far.

This is said to have saved enough basic cereal crops to feed eight million people.

However, there are concerns this will have a negative impact on biodiversity and other creatures that aren’t causing any harm.

There’s a risk the plague of insects could soon spread to other countries in South America.

Experts think climate change could be linked to the issue.

Here’s some things you should know about the insects…

Locusts have been feared throughout history because they can form enormous swarms and devour crops, which can cause famine.

Plagues of locusts have been documented devastating civilisations as far back as Ancient Egypt.

They look like ordinary grasshoppers but they have big hind legs for jumping.

With the right warm and wet conditions groups of locations can breed rapidly and enter a gregarious phase.

This phase can see them change shape and colour, their endurance can increase and their brains get bigger.

Some species can travel around 81 miles in a day.

In other news, insects trapped in amber for 99million years have revealed stunning details about creatures from that time period.

What are your thoughts on this locust swarm issue? Let us know in the comments… 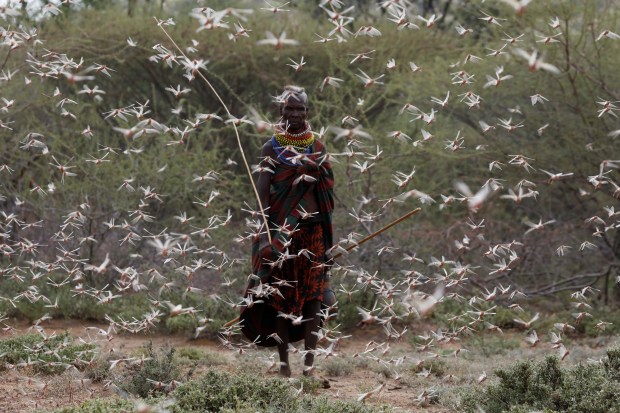 July 4 warning NOT to use hand san...