Close
Trending News
HomeSportZlatan is back! Ibrahimovic returns with a goal from the spot as AC Milan THRASH title hopefuls Lazio (VIDEO)

Zlatan is back! Ibrahimovic returns with a goal from the spot as AC Milan THRASH title hopefuls Lazio (VIDEO)

Zlatan is back! Ibrahimovic returns with a goal from the spot as AC Milan THRASH title hopefuls Lazio (VIDEO)

Zlatan Ibrahimovic made his first Serie A appearance since the COVID-19 halted the season as he helped fire AC Milan to a resounding 3-0 win over title hopefuls Lazio.

Lazio’s fading title hopes were dealt a huge blow by an Ibrahimovic-inspired Milan, with the Rome side suffering badly from the absence of star striker and leading Serie A goalscorer Ciro Immobile, who missed the match through suspension.

READ MORE: ‘We ALWAYS have room for a champion’: AC Milan want ‘fantastic’ Zlatan to STAY in Italy despite talk of impending exit

Ibrahimovic then netted for what he thought was Milan’s second, but the offside flag saw the Swedish hitman’s effort ruled out.

But Zlatan’s frustration only lasted a couple of minutes, as Lazio defender Stefan Radu was penalized for handball. It gifted Ibrahimovic a penalty kick, and the mercurial Swede didn’t waste his opportunity as he scored from the spot, despite the efforts of Strakosha in the Lazio goal.

Lazio were left with no other option but to push forward in search of a lifeline, and they were punished just before the hour mark when Ante Rebic shot past Strakosha to put the seal on a dominant display from the Rossoneri.

Milan’s victory sees them move up to sixth in the Serie A table, while Lazio, whose stellar form prior to the season’s coronavirus interruption appears to have evaporated, are left wondering what might have been, with their title hopes now in tatters.

“We weren’t lucky in the key moments. In the first half, we conceded a goal from a deflected shot and another from a penalty.

“When we could have got back into it, we conceded the third goal which finished the game. But we won’t give up.” 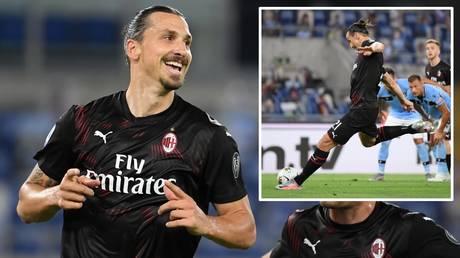