$455,000-a-week star Mesut Ozil has missed out on Arsenal action yet again but continued to deliver the goods on social media, sending readers into uproar with a savage reply to Piers Morgan after he told him to leave the club.

Arsenal’s highest earner issued a now-familiar rallying cry after being left out of the squad for the Gunners’ trip to Leeds on Sunday, acting as a distant cheerleader for his teammates again by enthusiastically telling his Twitter audience: “Let’s go.”

TV contrarian and Arsenal fan Morgan responded in typically forthright terms, warning Ozil that his vow to see out his lucrative deal, which ends in June, was ill-fated.

“I wish you would, Mesut,” chirped the provocative journalist. “For your sake and Arsenal’s.”

I wish you would, Mesut.
For your sake and Arsenal’s. https://t.co/guyV1K2gP2

Piers, was that really you, or was your phone hacked? 👂📲 https://t.co/g2GW6YTE8R

Midfielder Ozil swiftly seized on the opportunity to call out consistent critic Morgan, hitting back: “Piers, was that really you or was your phone hacked?”

Some of the former Germany playmaker’s following of well over 25 million were astonished by the exchange, arriving as the latest episode in which Ozil has won over sections of the club’s fanbase.

“Oh my god, I love you so much,” wrote one, countered by others who pointed out the astronomical salary Ozil has collected in return for making no first-team appearances so far this season.

Amid a torrent of memes, one skeptic wished that they could earn as much as Ozil while tweeting, and another pointed out that his rapier-like response had been more precise than Arsenal had been in an afternoon that saw them fail to find the net against their newly-promoted opponents.

Never reluctant to engage in a row, a clearly furious Morgan accused Ozil of making a mockery of the club faithful, retorting: “First tackle you’ve put in this season – well done!

I must say @MesutOzil1088, I admire your nerve in trolling Arsenal fans who pay your wages given you’re getting £350k-a-week of OUR money to sit on your a*se doing f*ck all. Try training as hard as you work on being a clever dick. Then the manager might pick you.

“I must say, I admire your nerve in trolling Arsenal fans who pay your wages given you’re getting £350,000 a week of OUR money to sit on your ass doing f*ck all.

“Try training as hard as you work on being a clever d*ck. Then the manager might pick you.”

News recently emerged that Ozil had been paying for meals at schools in the vicinity of Arsenal’s London home this year, and he also offered to pay the wages of the man behind the club’s Gunnersaurus mascot after the entertainer was laid off as part of cost-cutting measures.

more shots on target than our players today

Former manager Freddie Ljungberg, who acted as Arsenal coach before current boss Mikel Arteta and was his assistant until August, suggested to Sky Sports that he would pick Ozil again.

“When I chose to play him, it was because at a club such as Arsenal, when you play at home against – no disrespect – smaller clubs who you think you should dominate, he should be on the pitch to unlock things with his special passes,” explained the former midfielder.

“Yes, he maybe doesn’t have the athleticism now that is demanded in the Premier League, so you lose a little bit of that.

“When you play Manchester City and they have the ball all the time and all you do is run after the ball the whole time, maybe that’s not the game for having Mesut on the pitch. But if you want creativity, his left foot is fantastic.” 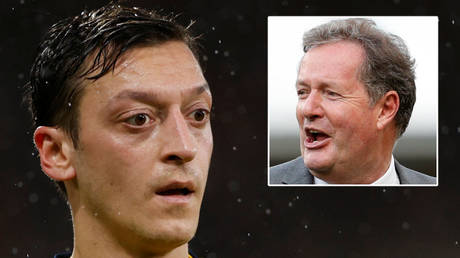