Stepping into the ring for a second boxing match, Paul crumpled former New York Knicks star Robinson with a big right hand in the second round of their contest on the undercard of the Mike Tyson versus Roy Jones Jr. comeback event at the Staples Center.

Paul, 23, had dropped his 36-year-old opponent twice in a predictably scrappy fight, before finishing him with a swinging right hand which left Robinson prone on the canvas for several worrying moments before he was eventually helped up.

Not bad for a Youtuber 👀 pic.twitter.com/obSk8PEhCM

Paul used his post-fight interview to claim he was just getting started in his boxing career – calling out former two-weight UFC champion McGregor and his teammate Danis, and vowing he would knock either man out. He also targeted fellow YouTuber KSI – who defeated Jake Paul’s brother Logan via split decision in their boxing rematch last year. The Brit, however, claimed he had not been impressed with what he had seen.

I saw nothing special from Jake lol. Soon come.

Paul also revealed in his post-fight interview that he had broken his nose in the run-up to the fight after falling flat on his face while meditating. The injury prevented him from sparring until just a few days before the fight, the YouTube star said.

Jake Paul being very gracious in victory. No trash talk towards to Robinson.

Paul says he is interested in “Conor McGregor, Dillon Danis” next, says he’d knock both out.

How big does the bag💰 have to be for you to get knocked out like that for the world to see?

Man this some bullshit! Nate don’t need to be in there with no head gear! Can’t play boxing! Wtf @triller 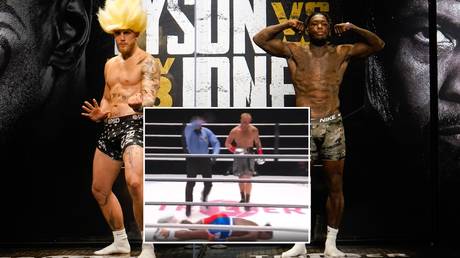 Indian’s appetite for gold grows a...