Ahead of his April boxing match with ex-UFC welterweight Ben Askren, internet prankster Jake Paul has teamed up with Evander Holyfield as the iconic ring veteran plots own path towards lucrative Mike Tyson rematch.

Paul, 24, will look to improve his professional record to 3-0 (without ever fighting a professional boxer, mind you) when he takes on respected mixed martial artist Askren on April 17, in what is the latest in a long line of ‘celebrity boxing’ matches to have captured the attention of the social media generation.

The YouTube star, whose brother Logan Paul is set to fight Floyd Mayweather later this year, has two knockouts on his record to date – the first coming against fellow YouTuber ‘AnEsonGib’ on what was Paul’s professional debut. That was followed in November by a KO against former NBA star Nate Robinson on the undercard of the Mike Tyson vs. Roy Jones comeback fight.

And apparently eager to prove that he belongs in the ring with the best, Paul published a brief video to Instagram which shows him taking some notes from the legendary former heavyweight champion Holyfield.

Paul republished the footage, simply describing Holyfield as a “legend“.

Holyfield is understood to be in talks to end his ring exile after a decade away from the sport ahead of a proposed third fight with former rival Mike Tyson.

The two most dominant American heavyweights of their era clashed twice in the 1990’s – the second of which led to one of the most infamous moments in the sport’s history when Tyson was disqualified for biting a chunk of Holyfield’s ear off in 1997.

Now though, both men have mended fences and are eager to do battle one last time after Tyson ended his own 15-year hiatus from the boxing ring when he fought Roy Jones Jr. to an eight-round draw in an exhibition match in November – a fight which was reported to have generated somewhere north of $80 million pay-per-view revenue in the United States.

Dubai has been speculated as being the most likely host for the rumored fight.

Holyfield was also pictured in recent days training alongside another former world heavyweight champion Wladimir Klitschko which prompted further speculation that details of his mooted Tyson fight will be released soon.

And as for Jake Paul, his own test in the ring comes in less than two months time – and he will no doubt be relying on some of the tricks he has learned from Holyfield to dispatch former US Olympia Askren, a fighter who boasts an exemplary grappling pedigree but whose striking has often been called into question by fans of mixed martial arts. 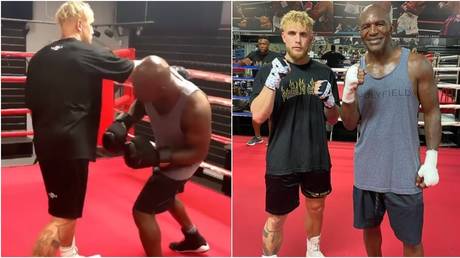 LeBron vs Zlatan: Please, spare us...