A 95-year-old thrill-seeker has admitted to doubts about making it down some of the world’s greatest mountains, but said he is looking forward to descending from a summit at 100 after becoming the world’s oldest heli-skier.

Gordon Precious celebrated his 95th birthday by taking a helicopter to the top of the Cariboo Mountains, the northernmost subrange of the Columbia Mountain in British Columbia, before breaking the record he set in 2019 down the vertiginous slopes.

The slaloming veteran was accompanied by an experienced guide and spent three days skiing with family members once he had reached the bottom.

“You feel like you’re in a different world from civilization,” Precious told his grandson, recalling how his skiing exploits had begun in 1937, when he was 12.

“Every time you get out, you get your skis and then the helicopter takes off, it just seems to fall down the mountainside.

Ontario-born Precious has skied all over the world, first taking his grandson with him 27 years ago.

“We’ve skiied all over together – we even went to ski in Iran, all above the treelines and wide open slopes,” he said.

“When I started, we had no steel edges and no safety bindings. There was just a leather strap and a clamp that went around behind your heel. The better skis came later.” 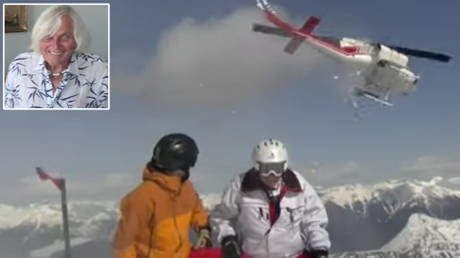