‘You’re DESTROYING her for the Gram’: Worried viewers accuse mother as SEVEN-YEAR-OLD girl squats 70lbs and deadlifts 90lbs in gym

‘You’re DESTROYING her for the Gram’: Worried viewers accuse mother as SEVEN-YEAR-OLD girl squats 70lbs and deadlifts 90lbs in gym

A seven-year-old girl who has been filmed squatting and deadlifting heavy weights in a gym in Instagram videos posted by her fitness-obsessed mother has been questioned by concerned viewers who fear her growth could be stunted.

The Florida-based child crossfitter is frequently filmed by her mother, gym leader Jes Bowen, performing calisthenics, overhead presses, clean and jerks and kettlebell moves in the gym in an attempt to build muscle.

Fitness influencer Bowen, who is the co-founder of Militia Fitness alongside her strongman and jiu-jitsu competitor husband, has insisted that her daughter’s health is not at risk after footage emerged of the youngster lifting a 90lb barbell with weights on it and squatting 70lbs – figures that some casual adult lifters would struggle to beat.

NFL running back Le’Veon Bell, of the New York Jets, was among those expressing consternation at the videos, while a hugely-followed fitness and injuries expert known as The Foot Doctor reacted by saying: “Destroying this kid for the ‘gram – shake my head.”

The clip of the girl – known as “bro” by her mother – performing an impressive deadlift with encouragement from a spotter sparked a debate around whether lifting heavy weights is healthy for children’s developing bodies.

“She’s about to be short forever,” said one, to which another responded: “Lifting doesn’t stunt growth. Catch up with the current evidence.”

Bowen, who said her protege is currently just over four feet tall, replied: “That is an old myth. She’s actually in the 90th percentile in height for her age. I’m 5ft9, so I have no doubt she’s going to be tall.”

The mother of two, who has more than 297,000 followers and describes herself and her daughter as “givers of strength”, enjoys enhancing her ripped abdominal muscles by carrying out core workouts with the budding lifter.

After posting a crossfit workout in which her daughter carried out power cleans and burbees over a barbell, she wrote: “Super proud of her focusing on her form in an intense workout.”

When they carried out moves including one described as a “plate grim reaper” on a leg day together, Bowen reported: “Bro and I hit up a dynamic leg workout. We increased the percentages of our front squats on each set.”

While Bowen is often met with replies praising her family as “cute” and admiring her commitment to keeping them fit, others are more cautious.

“Is this weight is not too much for her?” asked one. “Can she do those exercises?”

Another wrote: “Her poor legs are shaking for life and she has horrible form. Jeez, I feel horribly bad for that little girl’s back – especially when she is older.”

The prodigy has carried out a planking challenge with two-time Arnold Champion bodybuilder Blessing Awodibu and performed a chokehold on her brother during one of her jiu-jitsu sessions in the gym.

“I’m not even sure how to describe her,” Bowen has said. “Motivated doesn’t do it justice.

“She’s never afraid to try or fail, she just doesn’t quit. She’s been watching Olympic lifting and is determined to perfect her clean and jerk.” 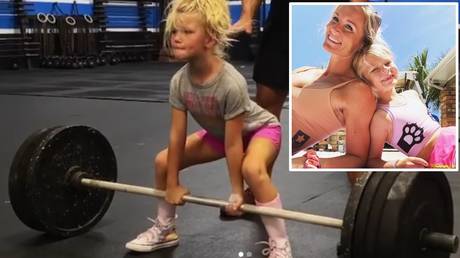