Manchester United striker Marcus Rashford has continued his fight to help disadvantaged children as he teamed up with a U.K. publishing house to give kids an opportunity to develop their reading skills from a young age.

Rashford was hailed earlier this month for forcing a government U-turn in his campaign to provide free meals for poverty-stricken children throughout the Christmas holidays, and has now begun to forge another path to help combat illiteracy in U.K. youngsters after teaming up with Macmillan Children’s Books (MCB).

Speaking about the idea, Rashford recalled that his family was forced to prioritize food over books when he was younger, leading to an almost complete lack of access to literature, and he said that the drive will affect “380,000 children across the UK today that have never owned a book.”

Imagine if all children were on an equal playing field. Imagine if we all started at the line equal instead of 20 yards behind. Imagine children waking up believing that their dreams could come true. Imagine what that belief could do for the future of this country…

“I only started reading at 17, and it completely changed my outlook and mentality,” Rashford continued.

“I just wish I was offered the opportunity to really engage with reading more as a child, but books were never a thing we could budget for as a family when we needed to put food on the table.

“There were times where the escapism of reading could have really helped me. I want this escapism for all children. Not just those that can afford it. We know there are over 380,000 children across the UK today that have never owned a book, children that are in vulnerable environments.”

A little bit more info 📚
Thank you for being on this journey with me @MacmillanKidsUK ♥️ pic.twitter.com/pHRhOoJoKK

Dolly Parton part funded COVID vaccine & her library donated 130 million books to children
Marcus Rashford fought to feed millions of poor children & has set up a free book club
Once again, people who grew up in deprivation do the most for others
What have Bezos, Musk etc done?

Right. Public libraries are AMAZING, we know that but they can’t help everyone access a book for many reasons, and as library workers and users we should know and appreciate this. What Marcus Rashford is doing with his book scheme is amazing and should not be knocked.

Rashford added that books “always will be, for every child, even if I have to deliver them myself.”

A book with input from Rashford called “You are a Champion: Unlock Your Potential, Find Your Voice and Be the Best You Can Be” co-authored by journalist Carl Anka, will be released in May 2021 to coincide with the launch of the book club. Each chapter of the book will begin with a story of Rashford’s life from when he was younger.

Rashford also said that books he is helping produce will feature a diverse set of characters of different races, genders and creeds, and that they will be accurate depictions of modern society.

It was revealed in the summer by the U.K.’s National Literacy Trust that just over a quarter of the UK’s under-18’s spent time reading each day – the lowest such level since the annual survey began in 2005.

This time around, Rashford’s campaign appears to have the backing of Downing Street from the onset, with Prime Minister Boris Johnson’s official spokesman saying that idea was “fantastic” and that he was looking forward to seeing the results of “the enjoyment which books bring.”

Rashford’s initiative and willingness to help youngsters in his native England has brought plenty of plaudits, but also raised the question of whether his efforts should actually have been the sort of ventures introduced and run by the U.K. government itself.

Indeed, Rashford’s push for free school meals to be extended first into the lockdown, then into the Christmas holidays, was met by resistance from Johnson’s government before the Prime Minister eventually backed down and performed U-turns as they bowed to public pressure.

Now, with Rashford looking to play his part to help improve child literacy, the question of whether it really should need a professional footballer to provide for kids in the absence of government help.

The children won’t be complaining, however, and Rashford, it seems, is more than happy to help. 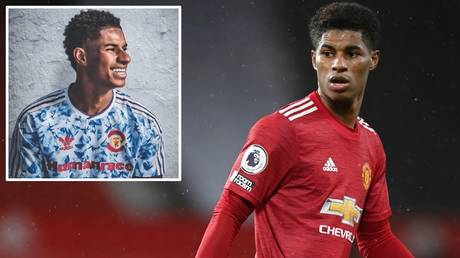