With the future of Lionel Messi still very much up in the air, supporters of Newell’s Old Boys took to the streets of Rosario – Messi’s hometown – to campaign for the Argentine legend’s homecoming.

As things stand Manchester City appear to be in pole position to secure a transfer for Messi after the six-time Ballon d’Or winner announced his desire to leave Barcelona this week, but with a host of Europe’s top earners looking to add the world’s greatest player to their ranks, Argentine Primera Division side Newell’s Old Boys have made their play to tempt Messi back to his homeland.

Messi joined Barcelona at the age of 13 from Newell’s and while it is unlikely that the club could assemble a transfer package which would rival elite European clubs, some are holding out hope that a sense of sentimentality – or even homesickness – could tip the balance in their favor.

Following a social media campaign, fans of the Argentine club gathered in Rosario on Thursday dressed in their team’s colors where some were seen lighting flares, while others carried posters bearing Messi’s famous face.

These moves, this left foot… 🐐 pic.twitter.com/DbtxKHRLJp

As you can see, Newell’s Old Boys fans are very keen for Messi to return home… pic.twitter.com/OmwLDiWJsY

The Lionel Messi banners have been taken from the Estadio Marcelo Bielsa and placed at Rosario’s National Flag Monument.

A successful transfer deal for Messi would be among the most famous days in Newell’s Old Boys history but as Jamie Ralph, head of the club’s English-speaking supporters’ club, told PA news, there is precedent for a groundbreaking move.

“Maradona was at Sevilla in Spain – he was only 33, so he was the same age as Messi – and he came back and signed for Newell’s, which was unbelievable at the time. This was the year before the ’94 World Cup,” Ralph said.

This is stance to which club vice-president Cristian D’Amico agrees.

“Maradona came and everyone believed it was impossible. What Newell’s fan doesn’t have the dream to see the greatest in our shirt?“

However, Ralph was keen to raise hopes too much. He says that he does expect Messi to one day return to Newell’s Old Boys – but maybe in a couple of years from now.

“I do think Messi will play for Newell’s one day, but personally think it’s a little bit too soon.” 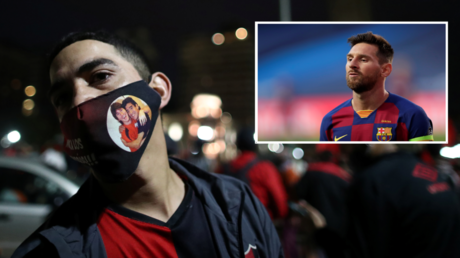