‘You’ll be OBSESSED with me forever’: UFC champ Adesanya MOCKS bitter rival as Costa threatens to KILL him over messages (VIDEO)

‘You’ll be OBSESSED with me forever’: UFC champ Adesanya MOCKS bitter rival as Costa threatens to KILL him over messages (VIDEO)

Israel Adesanya has revealed the messages that caused Paulo Costa to threaten him following his explosive victory over his acrimonious rival at UFC 253, telling fans that he tried to be “nice” as he feared Costa was “suicidal.”

The unbeaten champion appeared to advise Costa on his footwork in a screenshot of the purported messages he traded with the humbled Borrachinha following their scrap, adding an emoji of a male disco dancer before the Brazilian tersely replied: “Yes, maybe”.

In a message that belied his taunting of Costa after his second-round knockout and the subsequent vitriol he directed at his opponent’s corner, “The Last Stylebender” then reiterated his tactical advice, thanked Costa for the fight and wished him well.

“Next time, be more respectful and I’ll be respectful back,” he told the man who had called him “skinny”, “afraid” and attacked his African heritage in the build-up to battle.

“You were an asshole, so now I’ve got to get you back to make a point. Keep working and maybe in a few fights you may get another shot if you do well.”

Adesanya sang and danced around the ring in an outpouring of unbridled joy after his win, and he dismissed Costa’s subsequent threat to kill him as part of a series of “excuses” in a less forgiving post accompanying the screenshot.

“Adesanya, stop sending friendship messages to me,” Costa had retaliated in a video. “I don’t want to be your friend.

“I want to kill you. A lot of bad things happened before the fight. I was hurt before the fight and I’m not here to excuse [that]. I am here to say this to you: next time it will be different.”

The Nigeria-born New Zealander playfully referred to lightweight champion Khabib Nurmagomedov’s catchphrase of choice as he told Costa he had been “smeshed” and that he could “say all you want about me”.

“I tried to be nice low key, in case he was suicidal,” he explained to his following of more than 3.6 million on Instagram.

“Paulo, you haven’t even accepted that fact that you got schooled by the skinny guy who you kept trying to pick on. Now I’m a bully, but at least I’m nice.

“Your fragile ego cannot fathom how this ‘Skinny Clown’ was able to beat you so easily. Humble yourself and learn from this so you might grow as a person.

“I own your mind now because you’ll be obsessed with me forever, like my ex.”

The notoriously provocative Costa was clearly keen to portray his swift recovery this week, producing a series of videos of himself working out with weights in a gym. 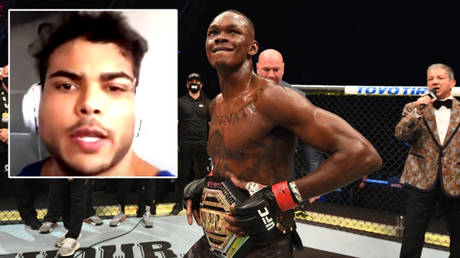