‘You screwed us TWICE’: Messi rages as referee denies his goal after lenient call on foul that fractured teammate’s spine (VIDEO)

‘You screwed us TWICE’: Messi rages as referee denies his goal after lenient call on foul that fractured teammate’s spine (VIDEO)

Lionel Messi could not believe his bad luck as Argentina drew with Paraguay in a World Cup Qualifier, watching referee Raphael Claus rule out his goal for a contentious foul and only book a back-breaking foul on a teammate.

On a turbulent night for Argentina, Angel Romero put Paraguay ahead in the first half before escaping with only a booking for a knee-first aerial challenge that poleaxed Exequiel Palacios and forced the midfielder to be carted off with a fractured spine.

Even after consulting a replay, Brazilian official Claus did not deem the foul that hospitalized the Bayer Leverkusen midfielder to be worthy of more than a yellow card – and there was worse to come for the hosts despite Nicolas Gonzalez’s equalizer four minutes before half-time.

Messi thought he had put his side ahead when he clinically converted a flowing team move from the left in the second period, only to be denied by Claus for a challenge by Gonzalez inside his own half at the start of the move that scarcely seemed an infringement.

The captain, who was carrying an ankle knock, was understandably frustrated after the final whistle, reportedly telling the referee: “You screwed us twice.”

He also looked “uncomfortable” during the match and took a pill from the bench – possibly a painkiller – at one point, according to Mundo Deportivo.

The altercation is the second clip in 24 hours to have shown Messi rowing with a referee.

“Hurry up and show me respect. You always do the same. Come on now.”

The Dutch referee can be seen pointing at UEFA’s “respect” logo on his shirt while apparently accusing the striker of time-wasting during a disastrous night for Barca in which they spurned a 3-0 first-leg lead.

The footage, taken from a trailer for a new UEFA documentary series about referees, is unlikely to have cheered Messi up after Argentina dropped their first points of their qualification campaign for the 2022 World Cup. They remain top of their group but coach Lionel Scaloni was incensed at Claus’s judgement over Palacios’s injury.

“Today, a player will be out for several days or months for a tackle,” he rued. “I don’t know [what] the intention [was], but the referee exists and the VAR does not review it. And we lost that player.”

A statement from the Argentine Football Association confirmed: “The player suffered direct trauma to the left paravertebral lumbar area, verifying a fracture of the transverse processes of the lumbar spine.”

Argentina are next in action when they visit Peru on Wednesday. 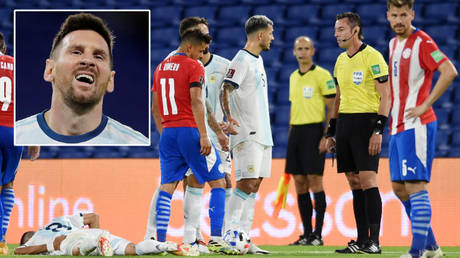