Unified world heavyweight boxing champion Joshua recently encouraged crowds gathered at a BLM rally in his Watford hometown to “abstain from spending your money in their [white-owned] shops and economies, and invest in black-owned businesses. Show them where it hurts”.

Joshua’s involvement in the rally came as initiatives have been implemented across various sports to show solidarity with the Black Lives Matter movement following the protests in the US and UK sparked by the killing of George Floyd in Minneapolis, such as printing the organization’s name on the back of players’ shirts in the English Premier League.

Fitness author and rapper Zuby, who gained viral recognition when he decimated the British women’s deadlift record while identifying as female to challenge the decision to allow biological men to compete in women’s sports, believes the message is “inherently racially prejudiced” and has challenged Joshua to make the first step by forfeiting income gained from non-black organizations.

“My first question is like, ok who pays him? Right? It’s like, okay, so you go first. Yeah, all your sponsorships. Let’s check all these companies that sponsor you, see who runs all these boxing organizations and if they’re not black people, then okay stop taking that money,” Zuby said.

“You go first. It’s just like, I don’t know, I think you could put out a message like that if you’re genuinely trying to encourage black entrepreneurship or businesses. There’s a way you can put out that message, which is not inherently racially prejudiced.

“If a white guy came out there and said ‘white people need to buy from white companies or not buy from black companies’, rightfully so they’d be done. They’d be toast by the time they stepped off the podium. Right? So it’s like, that’s not a good argument. That’s not a good tool to bring to the party. So let’s not let’s not go that way.”

The message was received negatively by some sections of the media and public, who accused Joshua’s speech of including racist elements. Fellow heavyweight champ and Briton Tyson Fury claimed he, as a white man and despite hailing from an ethnic minority background, would be “crucified like Jesus Christ” had he encouraged whites not to use the services of black enterprises.

WBC titleholder Fury, known as ‘The Gypsy King’, recently shared his own experiences of racial discrimination, claiming that despite being heavyweight champion of the world he is regularly the victim of epithets aimed at his Irish Traveller heritage. Zuby agrees with Fury’s stance on the speech, and has labeled the rush to intertwine sport with BLM as “bandwagon jumping” relying heavily on trends and social pressure.

READ MORE: ‘I still get called a pikey t**t’: Tyson Fury reveals he is a regular victim of RACISM for his Traveling background

“I think a lot of it is bandwagon jumping. Most people want to do what is right and want to do what is decent, but a lot of it is social pressure and bandwagon jumping. If you’re gonna just put Black Lives Matter on a jersey… are we targeting black people losing their lives in general? Are we talking specifically just about police stuff? What are we addressing?” he said.

“And if someone just sort of answers systemic racism or institutional racism, without being any more specific than that, that’s not a problem that we can like, target and fix. It needs to be more zeroed in. And then the second part of it is the sort of parlay into sports and football. I think if an individual player sort of wants to make a political statement within reason I’m okay with that.

“Do I think they should be forced to and this is just the position that everybody’s taking, and it doesn’t matter whether you’re on board or not, you just got to do this. I’m not a fan of that. I don’t like that. I think ideally, we kind of keep politics just out of football.

“Whatever the stance is, it needs to be consistent. I don’t think it can just be like, okay, we’re going to do this one because it’s trendy or popular right now, or this one is trending. So we’ll do that. But we won’t do that one.

“I imagine that it was a decision sort of made from the top down and they’re just like, okay, all the players are going to do this. And maybe some of them are on board, maybe most of them are on board, maybe some of them aren’t. Those who aren’t obviously won’t be able to say they’re not. And then they’ll be called racist because it’s called ‘Black Lives Matter’. The whole thing is a mess. I think it’s very intentionally set up to be like that.”

Joshua’s speech came just days before the launch of the ‘Black Pound Day’ initiative in the UK, held on June 27 and scheduled to occur every month, with the objective of encouraging people to ‘buy black’ by more frequently using and booking the services of black-owned businesses.

BLM’s introduction to sport has been met with differing reactions. In the Premier League, whereas players and clubs have seemingly unanimously accepted its featuring on their kits, a supporter of Burnley ordered a plane with a banner reading ‘White Lives Matter’ attached to its tail to fly over the stadium during his team’s match away to Manchester City, purposefully timed for when the players symbolically knelt in solidarity with the movement.

Zuby believes that while the debate between those for and against the movement is merely a “distraction” and largely digresses from the issues of brutality and justice that should be the focus of discussion, a number of BLM messages can be called into question for being deliberately divisive.

“Do you want to actually solve the problems that we have? Or do you want to just feel virtuous and scream at each other and yell at each other. And oftentimes, it seems like it’s the latter rather than the former.

“[BLM] is a Marxist organization founded by Marxists. Where the money goes is very, very suspect. They’ve got some strange goals, including wanting to defund/abolish the police, disrupt the nuclear family, BLM UK are saying they want to dismantle capitalism, all of these things.

“This has nothing to do with the statement ‘Black Lives Matter’. So if someone is not on board with some of those goals, like I am not, despite the fact I obviously agree with the core statement, then it divides people up in that way. Instead of uniting people, you just end up with people bickering and fighting over nonsense.” 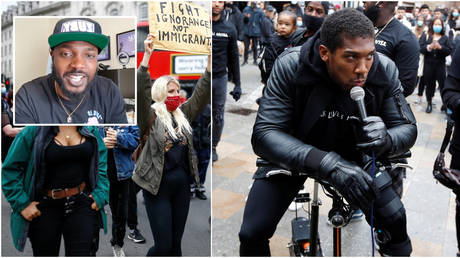