Such is the financial clout of Paris Saint-Germain’s Qatari backers that they could bring megastars Cristiano Ronaldo AND Lionel Messi to the Parc des Princes, according to the agent of current PSG star Neymar.

This summer has seen rumors that both Messi and Ronaldo could move on from their current employers after particularly disappointing seasons in Europe.

Ronaldo helped Juventus to a ninth successive Serie A title, although the Italians crashed out of the Champions League at the hands of Lyon in the last 16.

There has been speculation that the 35-year-old Portugal star openly mused that he could leave Turin, with Paris his preferred destination.

Meanwhile, Barcelona did not even manage to keep their hands on their La Liga crown, relinquishing it to Real Madrid before suffering an 8-2 humiliation by Bayern Munich in the Champions League quarterfinal.

That result precipitated the sacking of manager Quique Setien and has reportedly left Messi, 33, seriously contemplating a Nou Camp exit.

In contrast, life for Neymar at PSG has never been so sweet, with the French club into a first-ever Champions League final against Bayern Munich on Sunday.

The Brazilian forward arrived in Paris in 2017 from Barcelona in a world-record €222 million deal – part of the more than €1.2 billion ($1.43 billion) that PSG’s Qatar Sports Investments (QSI) owners have splashed out on players since taking over nine years ago.

Neymar’s agent, Wagner Ribeiro, has claimed that financial power means PSG could bring in CR7 and Messi, should they so desire.

“Neymar is happy and I think he will stay at PSG for at least two more years,” Ribeiro said, as quoted by football outlet Goal.

“Today, without any doubt, it is easier for Messi to go to PSG than for Neymar to return to Barcelona.

That pronouncement may seem like fantasy football – matching two players with 11 Ballons d’Or between them alongside Neymar and PSG strike partner Kylian Mbappe – but it still left some fans salivating at the prospect.

“Front 3: Neymar, Ronaldo, Mbappe. Messi lingering behind them. PSG really playing this out like Ultimate Team,” read the response from one excited fan.

Front 3: Neymar, Ronaldo, Mbappe. Messi lingering behind them. PSG really playing this out like Ultimate Team.

As Ribeiro suggested, Neymar does indeed seem far more settled than at any other time since swapping Barcelona for Paris.

Persistently linked to a move back to Barca, those rumors have died down after figures at the Catalan giants said they couldn’t afford to bring the Brazilian back even if they wanted to, due to financial devastation wrought by the Covid-19 crisis.

Neymar, 28, has been credited with showing renewed commitment to the PSG cause in helping their drive to the Champions League final.

While not getting on the scoresheet in either the quarterfinal victory over Atalanta or semifinal win against RB Leipzig, he often pulled the strings and showed a willingness to hassle and harry that few have associated with the Brazilian before.

They will, however, face their sternest test yet in the form of German juggernaut Bayern in Lisbon on Sunday.

Hansi Flick’s team cruised past Lyon in their semifinal on Thursday night, winning 3-0 thanks to a double from Serge Gnabry and a late strike from prolific Pole Robert Lewandowski. 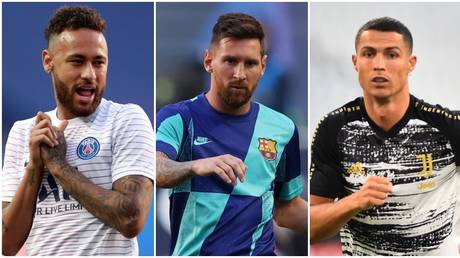