‘You cannot skate till 30 and win’: Russian figure skating prodigy Alena Kostornaia says she might RETIRE after 2022 Olympics

‘You cannot skate till 30 and win’: Russian figure skating prodigy Alena Kostornaia says she might RETIRE after 2022 Olympics

Reigning European figure skating champion Alena Kostornaia has revealed her post-career plans, outlining she might retire after the 2022 Beijing Winter Olympics and switch to medicine.

The 16-year-old produced a stunning performance during her first senior season winning all major events, including the ISU Grand Prix final and the European championship.

READ MORE: ‘She is harsh, but this is the way to win’: Former skater defends Eteri Tutberidze’s methods of training champions

In recognition of her splendid results she received the ISU skating award for Best Newcomer. Kostornaia said she doesn’t plan to have a long-term skating career admitting that she won’t be able to always hold leading positions and beat quad-jumping youngsters.

“It’s really simple: Figure skating is not a sport in which you can skate up to thirty years and win. Yes, you can skate, you can please the audience, participate in shows, but you won’t be in first place because there are 15-year-old girls who produce a bunch of quadruples. They have a lot of power and energy. There’s no stopping them,” Kostornaia said.

On a night of glamour and glory our ISU Skating Awards winners were crowned as we celebrated a short but incredible season on the ice.

The immensely talented skater who possesses a gorgeous triple axel said she would attempt to learn a quad Salchow to increase her technical content.

Unlike her teammates, Alexandra Trusova and Anna Shcherbakova, Kostornaia is not capable of doing quads.

However she managed to beat her more technically gifted rivals by receiving enormously high scores for immaculately landed triple axels. 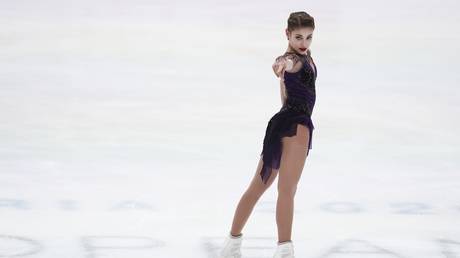