Close
Trending News
HomeSport‘YOU be better’: Mets players panned after bizarrely giving thumbs down to own fans in stadium during 9-4 win

‘YOU be better’: Mets players panned after bizarrely giving thumbs down to own fans in stadium during 9-4 win

‘YOU be better’: Mets players panned after bizarrely giving thumbs down to own fans in stadium during 9-4 win

Supporters have reacted online after a string of New York Mets players bizarrely decided to boo their own fans and give them a thumbs down over a perceived lack of support at their Major League Baseball games.

After seeing their men go from leading the NL East to losing 12 of their last 14 outings and pretty much blowing their chances of making the playoffs, ball game goers have every right to feel incensed.

Despite putting together three wins in a row and slightly rectifying matters, however, a trio of players decided to make their feelings felt during game three of a series with the Washington Nationals at Citi Field in Queens.

After smashing a home run in the eventual 9-4 triumph, Javier Baez gave the thumbs down to those in attendance alongside Francisco Lindor and Kevin Pillar, then later explained the logic behind his action post-game.

Francisco Lindor, Javier Báez and Kevin Pillar were among those Mets players to flash thumbs-down signs after their hits today.

“It feels bad when I strike out and I get booed. It doesn’t really get to me, but I want to let them know that when we have success, we’re going to do the same thing, to let [fans] know how it feels,” said Baez.

“When we don’t get success, we’re going to get booed,” Baez added.

“So [the fans] are going to get booed when we get success.”

“They’ve got to be better,” Javier Báez said of the Mets’ fan base.

His full comments on the team deciding to “boo” back at fans: pic.twitter.com/EgoMXhzZcD

Only joining this summer, Baez is perhaps not yet accustomed to such demanding crowds in the Big Apple, which his team’s general manager Luis Rojas suggested he will have to get used to.

“[Fans] have the right to react however they want. Especially Mets fans, New York fans, this market, this city knows baseball probably more than any other city,” he said.

“They have the right to react however they want, and we got to understand where they’re coming from. Our job is to be ready every day to give them the best baseball.”

The New York Mets just put out a statement in which the team president said it’s OK for fans to boo, it’s not OK for players to mock their fans for booing and there’s going to be a team meeting to address this. pic.twitter.com/xWNj3NFoBu

Elsewhere, the Mets have also taken this line and condemned the rebel trio in a statement by president Sandy Alderson.

“Mets fans are understandably frustrated over the team’s recent performance,” it began.

“The players and the organization are equally frustrated, but fans at Citi Field have every right to express their own disappointment. Booing is every fan’s right.

“The Mets will not tolerate any player gesture that is unprofessional in its meaning or is directed in a negative way toward our fans,” he added, before vowing to meet with his stars to pass on the message.

“Mets fans are loyal, passionate, knowledgeable and more than willing to express themselves. We love them for every one of these qualities,” Alderson signed off.

All 3 should be benched the next game. Unacceptable.

I’m not allowed to boo this? pic.twitter.com/n8ZzSqHj61

Online, though, backlash towards the boo boys was widespread.

“All three should be benched the next game. Unacceptable,” demanded one disgruntled party.

“I’m not allowed to boo this?,” asked another, while sharing a clip of a ball being missed with the bat by a country mile.

Dog YOU gotta be better

We the fans have to be better???? We’re not the ones on the field playing like garbage for the past 2+ months. Give me a break. YOU be better. You and your teammates. Take a hike.

“We’re not the ones on the field playing like garbage for the past two months plus. Give me a break.

“YOU be better. You and your teammates. Take a hike.”

“Dog YOU gotta be better,” someone else stressed.

Everyone get thicker skin. Jesus.

But not everyone was offended.

“I’m fine with this,” revealed one Mets fanatic.

“You can flip me the bird as you backpedal around the bases as long as you win. Everyone get thicker skin. Jesus.” 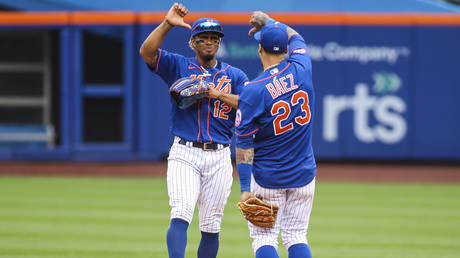