Instagram model and golf pro Lucy Robson has been steadily growing her online following during the COVID-19 pandemic, and her latest post left fans feeling decidedly uncomfortable as she performed a terrifying trust shot.

Usually, her posts receive a succession of complimentary replies from her adoring fans, but her latest video prompted a very different reaction.

That’s because Robson’s latest post featured a tense-looking trust shot as she hit a golf ball through the legs of her friend William Jones, who stood facing Robson with his legs at shoulders’ width apart, with only his hands to protect his groin.

Robson took a controlled swing before firing the ball unerringly between Jones’ legs and down the fairway without causing any damage to her friend, who had closed his eyes and grimaced in anticipation of the shot going badly wrong.

Robson shared the video with a simple question to her fans, “Would you trust me?”

Despite her huge popularity on Instagram, plenty of her fans admitted they didnt, with one fan commenting, “Not a chance,” while another said, “Absolutely not!”

One commenter paid tribute to the unflinching bravery of her friend, posting, “He has balls!” Another posted, “That’s ballsy!”

Thankfully for Jones, the trust shot went perfectly, and gave Robson a popular video for her Instagram channel, with the clip attracting more than 290,000 views and counting. 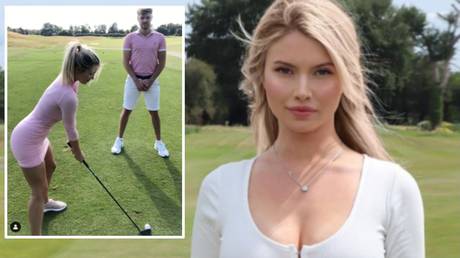