Close
Trending News
HomeSport‘Worst Barcelona in 25 years’: Defeat at Atletico piles pressure on Koeman – at this rate Dutchman is unlikely to see out season

‘Worst Barcelona in 25 years’: Defeat at Atletico piles pressure on Koeman – at this rate Dutchman is unlikely to see out season

‘Worst Barcelona in 25 years’: Defeat at Atletico piles pressure on Koeman – at this rate Dutchman is unlikely to see out season

Atletico Madrid earned a first La Liga win over Barcelona in more than a decade as Diego Simeone’s men beat the Catalans 1-0 in the Spanish capital on Saturday night, piling pressure on Barca boss Ronald Koeman.

Atletico ended their woeful record against the visitors at the Wanda Metropolitano thanks to a first-half stoppage time goal from Yannick Carrasco, who capitalized on a rush of blood from the head by Marc-Andre ter Stegen when the usually reliable German rushed recklessly from his box in an attempt to clear the ball, only to find himself stranded as the Belgian winger stroked the ball calmly into the net from 30 yards out.

The win elevated Atletico to second in the table, level on 20 points with surprise leaders Real Sociedad but with a game in hand.

For Barcelona it was a third defeat in eight La Liga games as they languish down in 10th, a full nine points off the top two.

As the Spanish press were quick to point out, the Catalans’ shocking start to the campaign means they have made their worst showing at this stage of the season in a quarter of a century.

There was little sign of life from captain and talisman Lionel Messi in Madrid, as he endured a night to forget – as did strike partner Antoine Griezmann, who was returning to his former club.

Barcelona also suffered the loss of veteran defender Gerard Pique, who is expected to be out for around a month with a knee injury. Full-back Sergi Roberto is also reported to have suffered a muscle injury which could keep him on the sidelines for several weeks, although he played the duration in Madrid.

The stuttering start to the season has done little to quell the sense of chaos engulfing Barcelona, after Messi agitated for a summer move before president Josep Maria Bartomeu was ousted in October.

That leaves the club in something of a limbo in the boardroom, which may work in Koeman’s favor to the extent that no decisions are made on his future even if Barcelona’s torrid form continues.

But such is the ruthless nature of life in the Blaugrana dugout, the Dutchman – who only took over after the short-lived reign of Quique Setien in the summer – will be under no illusions that his team need to pick up the pace, and fast.

“We played well in the first half, but a team like Barcelona cannot concede a goal in the 47th minute like we did,” Koeman said after the defeat to Atletico.

“The players are working well, but we want better results. In principle we have done our best.

“Then we had two very clear chances to equalize. It’s always difficult, we know that Atletico defend very well. The goal [we conceded] was our fault; it’s not good and it can’t happen.”

“Like any coach I am responsible. We know that we have to improve the results and we have to trust the players I have.

“We must improve in attack and defense. We know that we need to go on a run of winning matches.”

📊[MD] | Leo Messi gave only 8 forward passes. Koeman appointed him to be the creator of the team in the no.10 position but it was a quiet game from the Argentine. 5 passes to Dembele, 1 to Griezmann and 2 to Pedri. Besides, Messi also lost the ball 23 times.
A match to forget

Ronald Koeman had more points after eight games at Everton and Southampton than he does at Barcelona 😳 pic.twitter.com/OLKIpUAj3I

The defeat capped a week in which a disgruntled Messi had snapped at reporters on returning from long-haul international duty with Argentina, when the Barca skipper was asked about his relationship with strike partner Griezmann.

A former adviser to the French World Cup winner had claimed that Messi gave Griezmann the cold shoulder when he arrived at the club in the summer of 2019, accusing the six-time Ballon d’or winner of having a “deplorable” attitude and acting “like and emperor and monarch.”

After his aborted attempts to leave the club last summer, Messi will formally be able to speak to potential suitors in January with a view to making a move in the summer of 2021, when his contract ends at the Nou Camp.

By that time, Koeman could also be long gone from the Catalans’ dugout.

If Barcelona fans thought things were bad at the moment, the looming departure of their greatest-ever player and yet more managerial upheaval could make this an annus horribilis the likes of which they have not seen in decades. 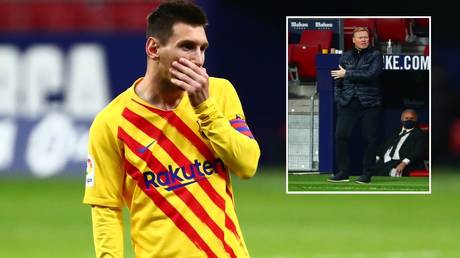 Bookies and pubs that don’t serve...