But, after the scenes that shocked the world as right-wing protesters, fired up following a rally fronted by Trump himself, stormed the Capitol building, forcing senators and house representatives to go into hiding for their own safety, Popovich has once again spoken out of his disgust as he torched Trump and those who have sought to profit from the chaos of the last few days.

In a long rant, Popovich said that he firmly believed that Trump took pleasure from the chaotic scenes at the Capitol that eventually led to the deaths of five people.

“I believe in all my heart that Trump enjoyed it,” he said.

“They talked about the police and how easy it was and they just walked right in. That doesn’t happen unless there is a wink and a nod somewhere. That doesn’t just happen.”

“He doesn’t care. He loved those people hitting the Capitol because that’s what he cares about. He’s incapable of caring. In one way, it’s sad because he’s a deranged and really flawed individual. But he’s also dangerous.”

Popovich also took aim at senators Josh Hawley and Ted Cruz, who is senator of Popovich’s home state of Texas.

“All of these people – Hawley is a joke. This entitled, elite educated person is really smart, just like Ted Cruz is smart. They threw fuel onto Trump’s fire,” Popovich stated.

“They are worse than Trump because they’re not sick. They’re not deeply flawed. Mr. Trump is not a well man. These people are sane.

“But their self-interest and their greed and their lust for power outweighs their love of country or sense of duty to the Constitution or to public service.”

Given its political content, Popovich’s comments received polarizing responses online. One fan tweeted, “It must suck to be @tedcruz and realize he’ll never have the admiration of Texans the way Pop does.”

Another said, “I love this guy. He shoots straight from the hip and he’s had Trump’s number from day one #Respect”

But others were less impressed, with one tweeting simply, “Pop is so woke,” while another followed up, replying, “They’re all woke. It’s funny how all these people in the mainstream think alike.” 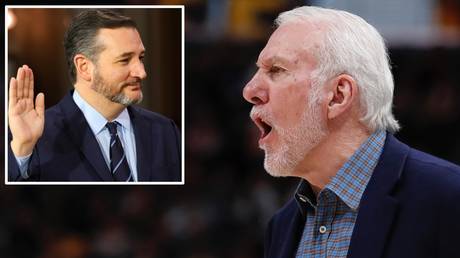