Hockey punch-ups can often be drawn-out affairs ending inconclusively but that was far from the case when Canada’s Mark Louis threw down with rival Patrik Maier in the Slovak Tipos Extraliga.

Dukla Michalovce defenseman Louis was a rapid victor in his fist fight with Slovan Bratislava’s Maier, detonating a brutal right hand which instantly sent Maier crashing face-first onto the ice.

Worryingly, the 24-year-old remained motionless as both teams watched on with concern before a stretcher was finally brought onto the ice to take away the stricken Maier, who was seen holding a bloodied hand on his head.

Thankfully, Maier did later come to his senses although reportedly could not recall any details of the incident which rendered him unconscious.

The disturbing scenes were later summed by teammate Marian Studenic, who said: “I felt sick when I saw a teammate lying motionless on the ice.

“I believe Patrick will be fine and will be quickly back in the lineup.”

Bratislava assistant coach Rudolf Jendek commented “someone there made a big mistake,” without elaborating.

In what may be some consolation for the bruised and battered Maier, the match ended in a 7:4 victory for Slovan over their less-fancied rivals.

Canadian pugilist Louis, 33, only joined the Dukla Michalovce ranks this season, having last played for the Cardiff Devils in the UK.

It’s safe to say he’s a man few will want to mess with after already making his mark in his new league. 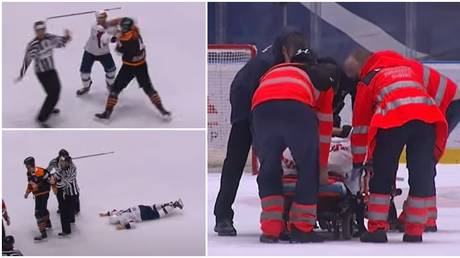 'We condemn any form of viole...