World number one Novak Djokovic has tested positive for Covid-19, making him the latest player to be confirmed to have the disease following the Serbian star’s controversial Adria Tour.

Djokovic tested positive on his return to Belgrade from Croatia, where he had been playing in the second leg of his new tour. Djokovic’s wife Jelena also has the illness, although their children have tested negative.

Djokovic becomes the fourth player from the Adria Tour – which held legs in Belgrade and Zadar on consecutive weekends – to be confirmed as having the illness, after fellow stars Grigor Dimitrov, Borna Coric and Viktor Troicki also all tested positive.

Djokovic’s fitness coach Marco Panichi is also believed to have the illness, as does Dimitrov’s coach, Christian Groh.

The inaugural tour had faced widespread criticism for going ahead in front of packed stands and with free mingling between the players.

After the first leg in Belgrade, a number of top 10 men’s players, including 17-time Grand Slam winner Djokovic, were pictured partying shirtless in a nightclub in the Serbian capital.

Tour organizers were forced to cancel Sunday’s final between Djokovic and Russia’s Andrey Rublev in Croatia when Bulgaria’s Dimitrov became the first participant to confirm a positive Covid-19 test, having flown back to his Monaco base.

Coric and Troicki subsequently joined Dimitrov as among those infected, followed by Djokovic on Tuesday.

Organizers of the Adria Tour have defended the event, stating that they “at all times strictly followed the epidemiological measures in place with the countries where the Adria Tour was organized.“

However, critics including fellow players have slammed the event, with doubles star Bruno Soares branding it “a horror show” and Australia’s Nick Kyrgios calling it “bone-headed.”

In a statement announcing his own diagnosis, Djokovic said he was asymptomatic while defending the hosting of the tour.

“Everything we did in the past month, we did with a pure heart and sincere intentions. Our tournament meant to unite and share a message of solidarity and compassion throughout the region,” he wrote.

“It was all born with a philanthropic idea, to direct all raised funds towards people in need and it warmed my heart to see how everybody strongly responded to this.”

“We organized the tournament at the moment when the virus has weakened, believing that the conditions for hosting the Tour had been met.

“Unfortunately, this virus is still present, and it is a new reality that we are still learning to cope and live with. I am hoping things will ease with time so we can all resume lives the way they were.

“I am extremely sorry for each individual case of infection. I hope that it will not complicate anyone’s health situation and that everyone will be fine. I will remain in self-isolation for the next 14 days, and repeat the test in five days.” 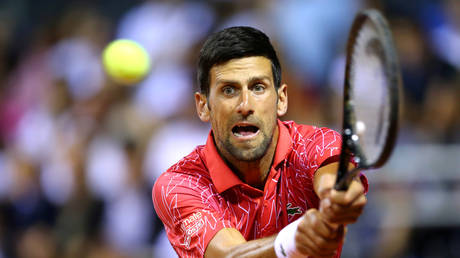