Won’t take no for an answer? Dana White says he’ll meet Khabib ‘soon’ to discuss plans despite UFC champ insisting he IS retired

Won’t take no for an answer? Dana White says he’ll meet Khabib ‘soon’ to discuss plans despite UFC champ insisting he IS retired

UFC boss Dana White is clearly not giving up on the idea that we will see Khabib Nurmagomedov back in the octagon again, revealing he will be meeting the undefeated lightweight champion ‘soon’ to discuss future plans.

Khabib recently doubled down on his retirement announcement, which came after he defeated interim champion Justin Gaethje on an emotional night at UFC 254 in Abu Dhabi in October.

“I had a goal to reach the summit and I got there. Further, I have no competitive interest,” Khabib said at a meeting in his native Dagestan last week.

🦅 ‘I have NO plans to continue fighting’

Khabib PUSHES BACK on Dana’s recent comments on him fighting again to reach 30-0. pic.twitter.com/1eELFFRQZQ

“Next year I will graduate. I’d like to do a masters course, dedicate more time to studying.

“I’ve bought sheep, I tend to my farm. I’d like to develop in this field a little. I have the bull calves out to feed, I have cows.”

For Khabib, it’s farming rather than fighting which seems to be on his mind at the moment.

But Dana White is clearly loath to let one of the UFC’s biggest names – not to mention cash cows – leave without a fight.

White has consistently suggested that he sees Khabib’s retirement as being short-lived and based on an outpouring of emotion after his win against Gaethje, rather than any firm logic.

After UFC 255 in Las Vegas on Saturday night, White doubled down on that line and revealed he would be meeting the 29-0 Dagestani “soon” to discuss future plans.

“I’m giving Khabib some time to think this over, he and I are going to get together and meet soon… we’ll talk,” White told the attendant media at the Apex facility.

The UFC boss has also maintained that Khabib remains lightweight champion, and that the likes of Conor McGregor and Dustin Poirier will not be meeting for the 155lbs title when they face off in January.

Khabib, 32, has said that his retirement announcement was based on a vow he made to his mother that he would no longer continue without his late father and trainer Abdulmanap, who died of complications stemming from a coronavirus infection in July. 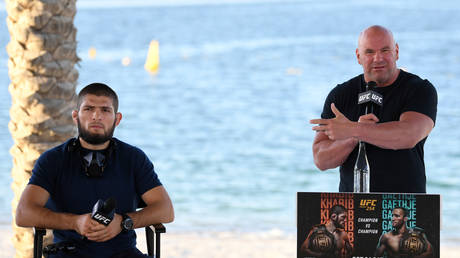