Close
Trending News
HomeSport‘With a performance like that, I would think I was on steroids too!’ Israel Adesanya denies PED allegations after UFC 253

‘With a performance like that, I would think I was on steroids too!’ Israel Adesanya denies PED allegations after UFC 253

‘With a performance like that, I would think I was on steroids too!’ Israel Adesanya denies PED allegations after UFC 253

UFC champion Israel Adesanya has denied that he is using steroids after fans noticed an unusual swelling on his right pectoral during his UFC 253 win over Paulo Costa.

Adesanya’s “painful” pectoral swelling was the source of much speculation when it was noticed on the broadcast in advance of his middleweight title defense against Costa last Saturday night.

Almost immediately, several internet sleuths falsely determined that the swelling was a result of gynecomastia, which is an increase in the amount of breast gland tissue in men often caused by an imbalance of the estrogen and testosterone hormones and is often caused by steroid abuse.

Adesanya, though, has laughed off the speculation and says that he doesn’t know what is causing the painful swelling and that he has undertaken blood tests and two MRI scans to get to the source of the issue.

“I might keep you posted, or I might let people speculate. It’s kind of fun to watch people cry about it.

“I don’t know what this is, but you know what? With a performance like that, I would think I was on steroids, too. They need something. ‘It couldn’t just be him. It couldn’t be him.’ It must be something.’ So for me, it’s just fun and games.”

Adesanya has to date been tested more than 30 times without issue by USADA, the UFC’s anti-doping partner, and he says that the move to eradicate performance enhancers in the UFC has visibly changed the physiques of several fighters – but Adesanya points to his kickboxing career and says that musculature has been consistent throughout.

“I’m not one of those people who needs a crutch, that when that gets taken away, they feel weak, they feel inadequate,” he continued.

“You see when USADA came through, a lot of people fell off. A lot of bodies changed, and a lot of people didn’t feel good enough without their little magic supplements. But yeah – not me. Skills, bro. Skills pay the bills.”

Adesanya, who remains in isolation before being granted permission to his native New Zealand due to COVID-19 protocols, says that he can’t help but feel that his detractors are clutching at straws to attempt to explain his continued excellent performances inside the cage, with steroids being the latest offering.

“Cry all you want,” he warned to his rivals. 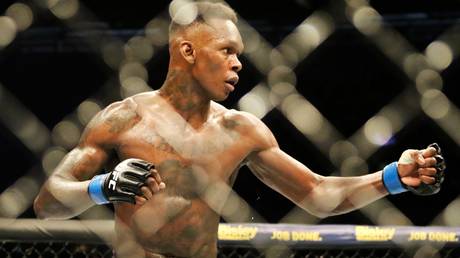