Close
Trending News
HomeSport‘Why nobody care about my a**?’: Mike Tyson responds hilariously to concerns he could have done serious damage to Jones Jr

‘Why nobody care about my a**?’: Mike Tyson responds hilariously to concerns he could have done serious damage to Jones Jr

‘Why nobody care about my a**?’: Mike Tyson responds hilariously to concerns he could have done serious damage to Jones Jr

Mike Tyson seemed upset about a lack of concern for his wellbeing when he took on fellow ring icon Roy Jones Jr in the pair’s comeback exhibition bout on Saturday, amusingly questioning why “nobody cared about his ass”.

Boxing legends Tyson and Jones fought to a contentious draw in their showdown at the Staples Center in LA, after which fans vented their anger that ‘Iron Mike’ had not been awarded victory for his evident dominance in a meeting between two men with a combined age of 105.

Tyson landed more punches across the eight two-minute rounds and generally looked sharper and better conditioned than his fellow veteran.

Heading into the bout, much of the concern had been over Jones’ welfare, despite the former four-weight world champion stepping between the ropes to compete far more recently than his rival.

The 51-year-old Jones last fought competitively in 2018, when he earned the last of his 66 career wins by defeating Scott Sigmund via unanimous decision in Florida.

In contrast, former heavyweight world champion Tyson last donned his gloves in the ring way back in 2005, suffering defeat to Kevin McBride in what was a sad end to his 58-fight career.

While Tyson arguably showed much less sign of ring rust on his return, he seemed irked in a post-fight interview that many of the fears had focused on the damage he could dish out to Jones.

“Why’d nobody care about my ass?” Tyson interjected when interviewer Jim Gray asked Jones whether he’d been worried about stepping into the ring with the former ‘Baddest Man on the Planet’.

“I didn’t fight in 15 years, he stopped fighting three years ago, and everybody worried about his ass,” Tyson added as Jones struggled to contain his laughter.

Gray then pointed out that “nobody thinks a giant is going to fall” – to which Tyson repeated: “I haven’t done this in 15, 16 years! I’m not a giant – I’m a beginner.”

Tyson vowed after the fight that he wanted more exhibition contests, having exceeded many people’s expectations over the form he would be in after such a lengthy absence from the sport.

The 54-year-old is expected to earn up to $10 million for his night’s work at the Staples Center, but has pledged to give much of that away to charity.

Jones, who is line to collect up to $3 million, also signaled he would be keen to run it back with Tyson.

The unofficial scorecards from a panel of former world champions assembled by the WBC for the contest ruled it a draw, with Chad Dawson scoring it 76-76, Christy Martin giving it 79-73 to Tyson, and Vinny Paz putting it at 80-76 to Jones.

That caused outrage among many, who felt Tyson had done more than enough to be declared the victor.

One person disappointed with the fight was Russian boxing writer Alexander Belenkiy, who described it as a “sad, sad spectacle” and urged fans not to fork out for similar events in future.

After the fight, Tyson admitted that his preparations had included indulging in his marijuana habit.

“I smoked during fights. I just have to smoke. I’m sorry. I smoke every day. I never stopped smoking,” he revealed.

“It’s just who I am. It has no effect on me from a negative standpoint. It’s just what I do and how I am and how I’m going to die. 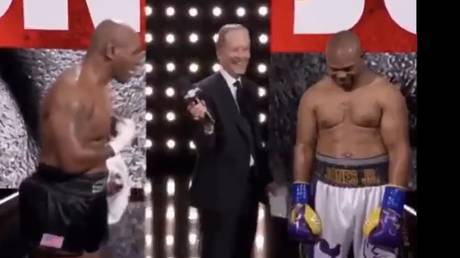