‘Why do you need figure skating? You’d do well without it!’ Alexandra Stepanova sets pulses racing with revealing photo shoot

‘Why do you need figure skating? You’d do well without it!’ Alexandra Stepanova sets pulses racing with revealing photo shoot

Russian ice dancer Alexandra Stepanova has sent her fans into a meltdown after sharing a picture from a revealing photoshoot where she poses in black lingerie.

The four-time European medalist, who is widely considered one of the most beautiful figure skaters in Russia, posted a black-and-white photo in which she poses in just a black jacket and underwear, drawing comparisons with elite models.

A huge army of Stepanova’s fans flooded her social media page to leave adoring comments about her impeccable lines and flawless figure.

“You are the best skater and model,” one person wrote.

“Where is Michelangelo? He could’ve carved your sculpture,” another fan said.

“Alexandra, why do you need figure skating? You would do well without it!” another comment read.

“I will have insomnia now! Your legs are really endless,” a fan added.

The 25-year-old, who performs with Ivan Bukin, has just returned from Germany, where she had treatment for her injured back. Her injury forced the pair to postpone their preparation for the new season and skip September’s test skate in Moscow.

Last year, Stepanova made headlines both in Russia and abroad, after donning a semi-transparent tight-fitting outfit for her exhibition performance at the 2019 European championships, where she won silver. 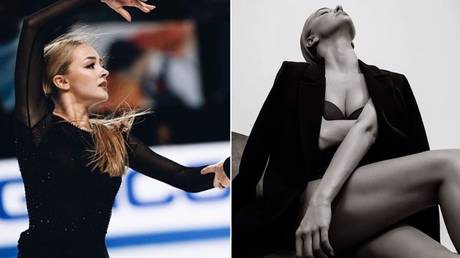