Close
Trending News
HomeSport‘Why didn’t he finish him?’ Jake Paul earns win over Woodley but fans angry at ex-UFC champ after he had rival on ropes (VIDEO)

‘Why didn’t he finish him?’ Jake Paul earns win over Woodley but fans angry at ex-UFC champ after he had rival on ropes (VIDEO)

‘Why didn’t he finish him?’ Jake Paul earns win over Woodley but fans angry at ex-UFC champ after he had rival on ropes (VIDEO)

YouTuber Jake Paul earned more begrudging respect for his boxing skills with a split-decision victory over Tyron Woodley – but some fans questioned why the former UFC champion didn’t finish the fight after rocking his rival.

Boxing upstart Paul improved his unbeaten professional ring record to 4-0 by winning his toughest assignment yet against Woodley, being declared victorious on the scorecards in the pair’s eight-round main event in Cleveland on Sunday night.

Paul looked the busier of the pair throughout the main event contest at Rocket Mortgage Fieldhouse, controlling the opening three rounds with his jab.

However, former UFC welterweight king Woodley – who was making his boxing debut – sent his opponent sprawling against the ropes with a big right hand in the fourth round, momentarily having Paul in serious trouble.

The YouTuber steadied himself as Woodley circled, with the latter preferring to showboat by gesturing with his right hand and unable to land more significant shots.

Tyron Woodley winding up his fist like a toy before he punches Jake Paul is the funniest thing i’ve seen in a min pic.twitter.com/5ANvy411QI

That sparked more active latter rounds from both men, although Paul again appeared the busier as he utilized his jab before being declared the winner in a split decision, 77-75, 75-77, 78-74.

“It was a tougher fight than I expected, my legs felt weird since the locker room. I don’t know what’s wrong with me,” said Paul, 24, in his post-fight interview.

“He’s a Hall of Famer, he had a good fight, he came in shape. I have a lot of respect for him. There’s been a lot of sh*t talk, apologies to his team if they were disrespected. This is a dream come true, I want to cry but I’m a little tired.”

Do you agree with the judges? pic.twitter.com/EI9hGMbpIS

Woodley had the power 💪

Despite being rocked by the big overhand right from Woodley, Paul claimed it was the only significant damage he had taken all night.

“He hit me with one shot all fight, it was a good shot and he had more shots, (but) there was only one real shot. I got eight rounds under my belt, all my previous opponents went in one minute. I’m doing things no-one has done,” said the social media celebrity.

The largely cordial post-fight scenes were in stark contrast to the fractious build-up to the fight, with Paul’s and Woodley’s mothers even embracing in the ring – the latter having been a target for supposed disrespect from members of the Paul camp prior to the bout.

Jake Paul and Tyron Woodley’s moms hugged in the ring after the fight. pic.twitter.com/pagzqLAjR3

The 39-year-old Woodley, though, demanded an immediate rematch and complained he had been robbed of victory.

“I thought I won the fight,” said the Ferguson-born fighter, urging Paul to shun a callout from British boxer Tommy Fury – the younger brother of world heavyweight champion Tyson Fury, and who had won his bout earlier on the card in Cleveland on Sunday.

“The fact one judge gave me two rounds? F*ck the (Tommy) Fury fight, let’s run that one again. Fury’s won’t get the paper views we did.

‘The ropes held him up, I landed more power shots. He landed clean shots but he had heavy hands. I didn’t hit the ground. Let’s run it back.

“You’re the one that got wobbled, if those f*cking ropes weren’t seven foot two, you would have gone through them.”

In bizarre scenes, Paul said he would agree to a rematch if Woodley got an ‘I love Jake Paul’ tattoo – which the former UFC king agreed to before the pair shook hands.

Hopes from many in the MMA and boxing community had been pinned on Woodley as the man who could finally derail the Paul hype train.

Heading into the bout, the YouTuber had already defeated fellow social media celebrity AnEsonGib in his first fight, knocked out ex-NBA star Nate Robinson in his second, and did the same to out-of-shape former UFC contender Ben Askren in his third outing.

Earlier this year the boxing community had also been forced to watch on as Logan Paul – the other half of the YouTube siblings – took on ring icon Floyd Mayweather in a much-maligned exhibition bout.

In the end, Jake Paul defied expectations again with his dedication – even though many fans were left demanding to know why Woodley hadn’t closed in more purposefully for the stoppage when he had Paul rocked in round four.

That went as far as some fans claiming the bout had been ‘rigged’ in the Cleveland star’s favor.

I understand why ppl saying rigged.. hella times Tyron Woodley would hit Jake Paul wit a shot and had no follow up it’s almost like he’ll hit him and wait for him to recover like “aye u good??”

The fight was rigged they never gave Woodley his knockdown 🙄🤦🏾‍♂️ #TyronWoodleyvsJakePaul pic.twitter.com/oWC81xpRbP

Is it just me or does it look like all the Paul brothers fights are rigged??? I mean Woodley could’ve ended this fight like 3 times already 🤔

I have so many questions on this clip. Woodley have every chance to get the K.O, but he backed down 👀 #WoodleyPaul pic.twitter.com/TslbYNFiMm

Elsewhere, reigning UFC welterweight king Kamaru Usman – the man who took Woodley’s UFC title from him, sparking a downward spiral in the octagon for the former champion – simply responded with a ‘facepalm’ emoji, perhaps summing up the mood among many in the MMA world.

Former two-weight UFC champion Daniel Cormier, another man who has traded words with Paul in the past, paid respect to the YouTuber’s commitment to his craft but lamented Woodley’s failed efforts.

Jake Paul showed he has toughness and won’t quit! Tyron wasn’t active enough, not a bad fight tho. It was activity! Paul was exhausted and when guys are that tired gotta show em the door. Whatever man. Dammit Tyron

Despite his handshake with Woodley on a rematch, Paul suggested he could take a step back to reassess his options after a whirlwind 18 months.

“I haven’t been to the dentist, I barely got my hair cut in the last two years.

“My teeth are crooked, my nose is crooked. I’ve dedicated the last 18 months to this. I haven’t stopped.

“I think I might need to chill out for a second and figure out who I am. I’m only 24, I’m changing, I’m growing, I’m learning a lot.

“I’m going through ups and downs and I’m making mistakes. But I’m keeping my head straight and we’ll see.”

Unable to resist one further jab on his detractors, Paul took to his widely followed social media accounts after the bout to post shots of him in action against Woodley, posing the question: “Who’s next?”

It seems the man known by the ring moniker ‘The Problem Child’ still hasn’t fully been solved. 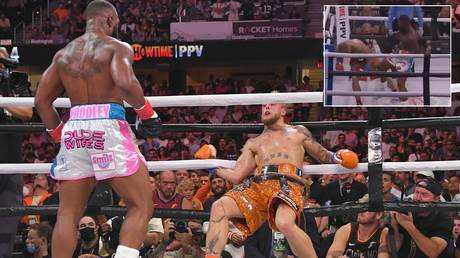