Footballs fans have joked that Manchester City’s FA Cup semi-final defeat to Arsenal on Saturday was enough to drive City manager Pep Guardiola to insanity as viral footage appeared to show him talking tactics with an empty seat.

Arsenal sprang an upset as they dumped holders Manchester City out of the competition with a 2-0 win at Wembley, thanks to a double from prolific Gabon ace Pierre-Emerick Aubameyang.

It was an inspired performance from a much-improved Arsenal team, who had similarly shocked newly-crowned Premier League champions Liverpool with a 2-1 league victory at the Emirates in mid-week.

Saturday’s win over City in London was also a case of the apprentice outdoing his master, as Gunners boss Mikel Arteta got one over on Guardiola, his former mentor while he was assistant boss at the Manchester club.

While Arsenal’s display was rightly lauded on social media, a moment from first-half injury time featuring Guardiola was also a humorous talking point for Football Twitter.

In the clip, the Spaniard was seen gesticulating in what appeared to be a tactical talk to an empty chair next to him.

“Arsenal have made Guardiola lose his mind, he’s started talking to an empty chair,” joked one Twitter account.

Arsenal have made Guardiola lose his mind, he’s started talking to an empty chair 😭😂 pic.twitter.com/f56PtTYlVJ

Another quipped that Guardiola was still under the illusion that erstwhile assistant Arteta was alongside him.

Guardiola has completely lost it. Who’s gonna tell him Arteta is no longer by his side
pic.twitter.com/IUdrZirsmA

Alas, while the footage made for amusing viewing, the full version showed the camera eventually panning back to reveal that the Man City boss was actually communicating with an assistant sitting a row behind him.

That Pep talking to an empty seat video that’s going the rounds is funny. It is also conveniently cut. He is talking to the man in the row behind him who doesn’t come into shot until the camera pans back a bit.

Guardiola and City will now turn their attentions to their final Premier League games of the season, against struggling Watford on Tuesday and then already-relegated Norwich next Sunday.

After that will be the business of the Champions League, as City host Real Madrid in the last-16 second-leg meeting at the Etihad in August, hoping to finish the job after a 2-1 win in the first leg in Spain before the Covid-19 shutdown.

City already have silverware in the cabinet from this season, winning the League Cup back in March with a 2-1 win over Aston Villa.

Arsenal will find out their FA Cup Final opponents when Chelsea take on Manchester United at Wembley on Sunday evening. 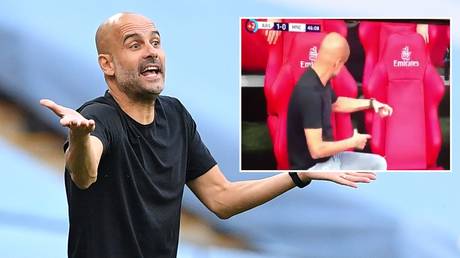