‘Who’s Dennis Rodman?’ NBA legend back in the headlines as his ‘unreal’ football star daughter, Trinity, makes history in US draft

‘Who’s Dennis Rodman?’ NBA legend back in the headlines as his ‘unreal’ football star daughter, Trinity, makes history in US draft

Football fans in the US have jokingly asked who ex-NBA star Dennis Rodman is after his 18-year-old daughter, Trinity, became the youngest player ever to have been chosen in a National Women’s Soccer League (NWSL) draft.

USA women’s national team under-20s forward Rodman was snapped up by the Washington Spirit, who used the second pick in the annual draft to sign the hotly-tipped prospect and scorer of two goals in a match against Mexico last March.

That helped the national side qualify for the World Cup, and 5ft 10in Rodman had been due to play for the Spirit before the pandemic put paid to the college season.

Rodman has described her father – a five-time NBA winner known for his flamboyance – as an “amazing athlete” and acknowledged that she “got those genes from him”, although she has emphasized that she intends to be known as an elite player in her own right.

And with the 2nd pick in the 2021 @NWSL Draft the @WashSpirit take our own Trinity Rodman.
Congrats to Trinity!! Big things ahead for her.#GoCougs pic.twitter.com/5fd1U6ZHvm

Rodman becomes the youngest player in the history of the @NWSL draft to hear her named called on draft night.#GoCougs

“Obviously [my dad] was an amazing athlete and I got those genes from him but I’m just excited to be known as Trinity Rodman, not Dennis Rodman’s daughter”

“This has been my dream forever,” Rodman said after the draft, speaking in the company of her mother, Michelle Moyer, who became her father’s second wife in a nine-year marriage after Rodman briefly wed celebrity Carmen Electra.

“I’ve been playing soccer since I was 4 years old. Right now I think it’s the perfect time to get in there and learn and become a better player.”

Some sensitive supporters criticized media outlets for making mention of Rodman in headlines about the draft.

He’s a HOF’er. A 5x champion. A living legend. A rock star who dated Madonna and Carmen Electra. He played in the NBA for well over a decade.

“Who’s Dennis Rodman?” asked one, while an admirer described his daughter as an “unreal” player.

Another asked: “Will we see the same exuberance and eccentricity from Trinity as we saw from her rather famous dad?”

Rodman made no mention of the move to his millions of social media followers, but his daughter made her first Twitter post in more than two years – having previously retweeted a post by lingerie firm Victoria’s Secret about reality star Kendall Jenner – to correct stories that mistakenly reported her age as 20.

Reacting on Instagram, the ecstatic prodigy grinned: “So beyond thankful. Holy cow, is this real?

“I just want to say thank you to every single human being that’s posted to me, supported me, congratulated me.

“Every single post means so much to me and, honestly, a lot of them made me cry. My dream just came true and seeing how many people support me is the best thing in the world.

“I’m so excited for the future and I want to thank all of you guys for being so amazing towards me.” 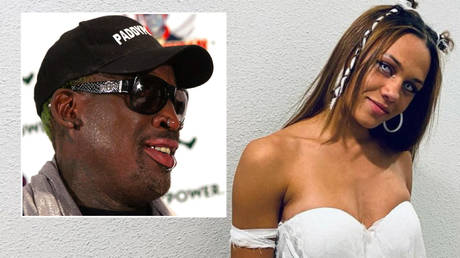 Absent he may be, but Chelsea...

‘Let me punch that booty...

Out of the race: US pharma giant Merck & French Pasteur Institute discontinue their Covid-19 vaccine candidates

Absent he may be, but Chelsea owner Roman Abramovich has proved he’s as ruthless as ever with Frank Lampard sacking

Recession is over for the richest few, while billions will live in poverty for at least a decade – Oxfam