‘Who thought Dua Lipa in FIFA was a good idea!?’ Gamers red-faced as pop star ‘GROPED’ by players during goal celebrations

‘Who thought Dua Lipa in FIFA was a good idea!?’ Gamers red-faced as pop star ‘GROPED’ by players during goal celebrations

Football fan gamers were left red faced when pop star Due Lipa, a featured player in the new FIFA 2021 game, appeared to be groped on the chest by unwitting teammates during a goal celebration.

English diva Dua, born in Pristina of Kosovar-Albanian heritage, was a controversial inclusion by gaming giants EA Sports, and further bemused hardcore fans by being given a face scan to perfect her likeness, while other players such as Manchester United starlet Mason Greenwood went without.

EA Sports have added Dua Lipa to FIFA 21 and given her a face scan whilst Mason Greenwood still looks like this 😂 pic.twitter.com/LQyP1UHOn2

However, the vast majority of fans clambered over themselves to get a hold of the game simply to catch a glimpse of the ‘One Kiss’ singer in her football kit.

Dua Lipa on fifa 😭, I can’t, what’s going on https://t.co/fYwxmxrkRS

Right, I know it’s 2020 and nothing should shock me anymore but I have two questions here:

2) Why the fuck is she in a Sunderland shirt?

I mean if it turns out she loves The Lads she’s definitely the one. 😍 pic.twitter.com/ci9mmzZLNn

But it seems the practicalities of having a female pop singer are a little deeper than just it’s shock factor and selling power. The behaviour of her teammates rather mirrored the minds of those acquiring the game simply to have Lipa under their command.

This was demonstrated by one user who, after scoring a goal with Lipa in the side of the English Premier League’s Tottenham Hotspur, watched as she received a celebratory pat on the chest from teammates Dele Alli and Lucas Moura.

Who thought putting Dua Lipa into FIFA was a good idea 💀🤣 pic.twitter.com/uKOaWWRfdN

“Who thought putting Dua Lipa into FIFA was a good idea,” the man holding his joystick wrote on Twitter, perhaps echoing the thoughts of many other fellow gamers. 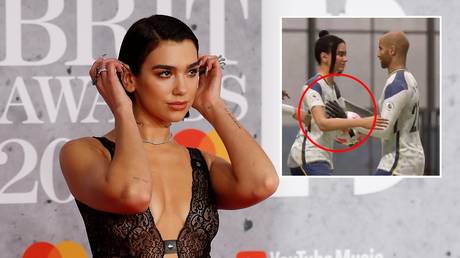