‘Which outfit do you prefer?’ Football freestyler behind strip-shirt craze asks fans to choose from skimpy kits (VIDEO)

‘Which outfit do you prefer?’ Football freestyler behind strip-shirt craze asks fans to choose from skimpy kits (VIDEO)

Brazilian freestyler Raquel Benetti, who sparked the quarantine keepie-uppie craze and likes to strip off while showing her skills, has revealed her latest adventure and asked fans to pick their favorite from a choice of outfits.

The 29-year-old filmed herself standing in a nightie in her bedroom before jumping onto three separate pairs of football boots, editing the sequence so that her outfit changed each time she landed on the boots.

As she hopped from pink to blue and lime pairs, her sports bras and figure-hugging shorts also changed colours while the accompanying message to her Instagram following of more than 1.2 million announced: “This is my everyday routine.

“Which boots and outfit did you like the most? Combine the boots with the clothes.”

Earlier in the day, Benetti, who inspired Manchester United midfielder Nemanja Matic to take part in her strip-shirt challenge during the COVID-19 quarantine, revealed she had been practicing volleys in the style of former United striker Zlatan Ibrahimovic during a trip to the woods in Sao Paulo recently.

Benetti joined Marcela Umeko, a player for Brazilian side Corinthians, on the adventure to record “a lot of cool content” for her YouTube channel.

“Two weeks ago we went to a place in Boituva in the middle of the woods to record,” she explained, showing a photo from the sessions in which she posed by a pool in swimwear with Umeko.

“It was so fun. We threw Marcela in the pool, we woke up at 7am with a woodpecker on the roof pecking at the wood and we looked at each other exhausted, with a sore body and finding everything great.”

The “muse of the freestylers” played for Corinthians as a youth and has represented Brazil at the International Freestyle Football Federation World Cup.

“We hope that we can transmit a little of our joy for you in the video, because it was incredible,” she told her fans.

“Recording is good but recording with people who love it too is even better.” 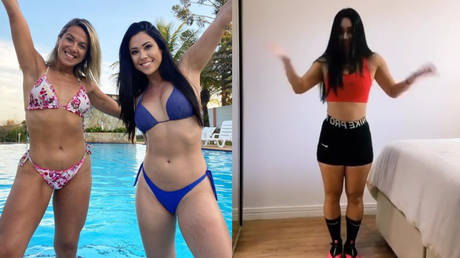