A promoter who offered a deal to rapper Morgenstern has hit back in the debate over the integrity of fights, insisting that he stands against “division and monopolization” following remarks by the MMA Union of Russia.

Enterprising businessman Anatoly Sulyanov is the founder of Hardcore FC, an MMA league which claimed to have signed the Russian musician and YouTuber earlier this year, making the announcement with a humourous video in which Morgenstern repeated his provocative call for MMA to be banned.

Sulyanov also counts the likes of rap sensation Dzhigan among his friends, the Ukrainian-Russian who claimed earlier this year that he will be fight storied veteran Alexander Emelianenko in Moscow on November 4.

Partly inspired by the rise of the Bare Knuckle Fighting Championship, Sulyanov’s league, which launched in mid-2020, has the kind of vast YouTube audience that most sporting organizations can only dream of, with almost 1.9 million subscribers.

One of the promotion’s recent videos, which has racked up almost 2.5 million views since being published earlier this month, features 45-year-old Emelianenko talking to Sulyanov in the ring about fighting Jeff Monson, a former UFC fighter who is five years his senior.

The promotion is sponsored by a bookmaker and has a keen sense of marketing, including scantily-clad ring girls showing off a finance card.

Radmir Gabdullin, the President of the MMA Union of Russia, has suggested that the involvement of gambling companies should be scrutinized and called for greater regulation of fighting leagues earlier this week.

Gabdullin said that “freak fights” and “pop MMA” – often involving celebrities or individuals with little or no professional combat experience – serve to “dishonor MMA” and are “introducing the wrong values.”

“I got acquainted with the statement of Mr Gabdullin on the limitation of the work of YouTube promotions in Russia, and I want to say a few things about this,” Sulyanov responded on Instagram, where he has a following of more than 1.2 million.

“We stand for sport and for its development, not for division and monopolization. Who will determine what is pop MMA? YouTube promotions [in which former] UFC fighters and Bellator [fighters] are performing – is it professional MMA or pop MMA? Who decides this?

“The fight between Monson and Emelianenko eight years ago was professional MMA, but now it suddenly becames pop MMA? Do I understand correctly that Gabdullin will develop criteria by which it will be determined what is what?

“How will he decide who are fighters and who are freaks? Which fights ‘shame’ and which ones promote sports?”

The fitness center owner appeared to suggest that rapper Chipinkos and YouTube prankster Efirov had fought under the logo of the MMA Union, also enquiring over whether bouts involving former UFC fighter Khadis Ibragimov and M-1 champion Maxim Divnich would be deemed worthy.

“Obviously, the MMA Union is unable to offer either the viewer or the advertiser a competitive product that takes into account the interests of the audience,” he claimed, citing an appreciation of “modern media realities” for the success of YouTube-promoted fights.

“The amount of attention Gabdullin paid in his statement to sponsorship of the bookmakers of YouTube promotions for the professional community speaks of only one thing – the fear of losing advertising money.

“Instead of developing the sport, making it more spectacular, increasing the advertising capacity of the market, he proposes to monopolize the budget market – that’s all.

“I am not surprised that the statement does not contain a word about the charity of YouTube promotions.

“Not a word about how much the industry has made a contribution to the development of sports in Russia and how many ordinary guys got the opportunity to realize themselves, change their lives. What alternative does the Union of MMA offer all of them?”

The exchange has parallels with the long-standing debate around the popularity of boxing and MMA, with the UFC seen by some as capitalizing on slick production and marketing to supercharge its popularity compared to promotions in the more established sport.

There is a particularly fierce debate around competition and fighter safety in boxing, which has seen the likes of YouTubers Jake and Logan Paul attract huge audiences to questionable contests, as well as veteran showdowns – most recently a shuddering defeat for former champion Evander Holyfield – that have drawn accusations of putting money above health and sporting value.

“We advocate a constructive dialogue between all members of the MMA industry,” said Sulyanov. “And we, for our part, are ready to share media opportunities and promotion experience.

“We are ready to adopt the best experience of other organizations. Sport will develop only in this way, thanks to competition and partnership, and not thanks to prohibitions and restrictions.

“In the end, what is interesting and what is not is determined by the audience – not by the unions or officials.” 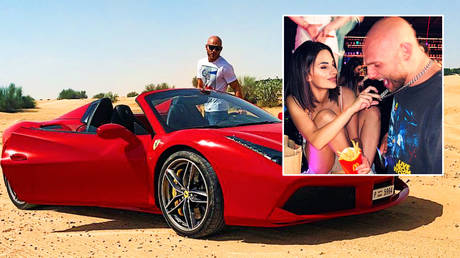