Close
Trending News
HomeSport‘Where did the time go?’ Boxing legend Mike Tyson marks 54th birthday by sharing photo from his prime as he prepares for comeback

‘Where did the time go?’ Boxing legend Mike Tyson marks 54th birthday by sharing photo from his prime as he prepares for comeback

‘Where did the time go?’ Boxing legend Mike Tyson marks 54th birthday by sharing photo from his prime as he prepares for comeback

Former heavyweight champion Mike Tyson has fueled excitement for his much-anticipated ring comeback with a melancholic post on his birthday, with fellow sports stars and celebrities saluting the boxing icon on his Instagram page.

Tyson was in reflective mood on his 54th birthday, posting a retro photo of himself smiling into the camera in a sleeveless green vest, baring gold teeth and rippling muscles with a tattoo of his name on his right arm.

The throwback picture provided a tantalizing reminder of Tyson’s prime before he lost his WBA heavyweight title to Evander Holyfield in 1996, reigning as the undisputed heavyweight champion of the world between 1987 and 1990 and becoming the first heavyweight boxer to simultaneously hold the WBA, WBC, and IBF titles.

“54 today,” the returning veteran wrote, following up his initial post with a clip of friend and actor Anthony Anderson hitting a heavy bag by an outdoor swimming pool while wishing him happy birthday. “Where did the time go?”

Tyson evidently feels he has no time to lose as he continues to plot his return to boxing, which he has been training for after an absence of more than 15 years from the professional ranks.

Still one of the most high-profile names in the sport, he has been linked with another fight against Holyfield, received a $20 million offer to compete in bare knuckle fighting and reportedly asked for around $610 million to fight current heavyweight champion Tyson Fury.

While some fighters and commentators have warned that his comeback is unwise – Tyson was knocked out by journeyman Danny Williams and retired against Kevin McBride when he made two previous attempts to return after long layoffs – others have been excited by footage he has shared of himself looking sharp and determined in training. 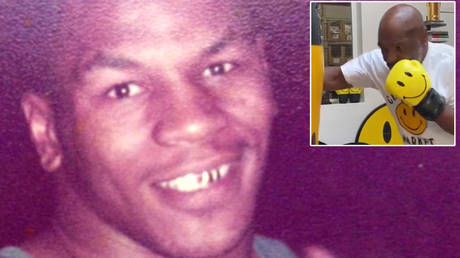 ‘Saving my life from this pois...