Colby Covington is keen to protect his territory in the UFC’s welterweight division and says that when the much-hyped Khamzat Chimaev has picked up some bigger wins, he’ll be ready to take him down.

Of all the UFC’s debutants this year it is inarguable that Chimaev has made the biggest impression so far.

The Chechen-born Swede won three fights in just 66 days, starting with his debut on “UFC Fight Island” this past summer.

He defeated middleweight John Phillips and welterweight Rhys McKee within 10 days of each other, absorbing a total of just two punches across those two fights.

Chimaev then followed up his impressive start to his UFC career with a stunning 17-second knockout of the vastly experienced Gerald Meerschaert in his Las Vegas debut.

Since then, the ever-confident Chimaev has thrown down the gauntlet to a host of fighters, with Demian Maia, Stephen “Wonderboy” Thompson, and more recently, middleweight champion Israel Adesanya being put on notice by the dominant newcomer.

One fighter who isn’t too concerned at the impact made by Chimaev so far, however, is Colby Covington. The former interim welterweight champion says that, as soon the newcomer beats some big names, he will take notice. Until then? He isn’t on his radar.

“I don’t even know who that is, man,” Covington told Submission Radio.

“I remember them saying there was some kid on my prelims that was fighting and he had a bunch of hype on him. He hadn’t fought anybody that’s ranked in the top 50 in the world.

“They didn’t even bring me into the building before the co-main event, so I didn’t see the prelims and this kid that you talk of, but if he gets some ranked wins and becomes somebody, come see me.”

Covington is widely expected to face former training partner Jorge Masvidal in his next bout, with the winner of that likely to face the winner of the welterweight world title fight between champion Kamaru Usman and top contender Gilbert Burns.

Chimaev seems more than confident that he will find himself in the title picture before long, particularly if he maintains his recent trajectory.

But, Covington says, should “Borz” work his way into his league, he will snuff out the dangerous newcomer’s momentum.

“I‘m the greatest fighter in the world,” Covington said.

“I’m not looking to avoid anybody, I’m looking to beat anybody and everybody in the way. You want to bring the hype machine behind these kids and think that they’re great, and this and that.

“That hype machine will get halted in a second if they come see Colby ‘Chaos’ Covington.” 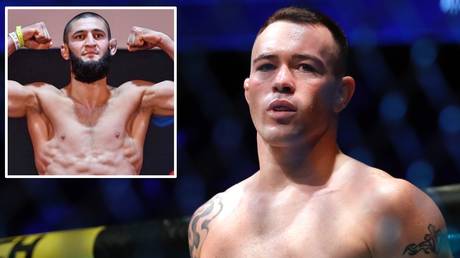